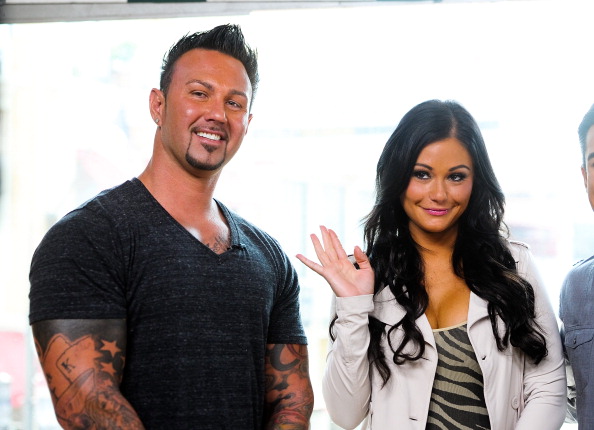 Jenni Farley and Roger Matthews met in Seaside Heights, New Jersey, while JWoww was filming the first season of Jersey Shore in 2010. After one wedding and two kids, the Jersey Shore couple are separating. On September 12th of this year, Farley filed for divorce on the reason of “irreconcilable differences.” Three months later the divorce is turning ugly.

On Friday, Farley and Matthews got into an argument about her work schedule and how it affected her daughter who has the flu. Matthews left the house to go do a podcast with MMA fighter Frankie Edgar and then returned home. Farley apparently filed a restraining order against her husband and police arrived at their house in Toms River to remove Roger from the home. Matthews posted a video of him in the back of a cop car. Matthews claims that he called the police initially to defuse the situation and to preemptively get ahead of any situation that may escalate.

“Police said if I want to go home… I mean, I’m not arrested. I’m not in jail, so there’s no crime committed,” Matthews explained. “It’s just somehow Jenni convinced a judge that a restraining order should be filed. I have no idea how. No clue. They couldn’t even explain it to me.”

“While Jenni has refrained from making any public statements relating to her impending divorce, in light of recent events we have decided to make an official statement. Certain events transpired last night which led Jenni to involve the authorities, as she felt it was in her best interests, and the best interests of her children to do so,” the statement reads. “Any statements and social media posts depicting anything to the contrary are entirely false, misleading and intentionally designed to cast Jenni in a negative light.”

The 43-year-old Matthews posted several videos on his Instagram claiming that he is innocent and that “justice will prevail in the end. An emotional Roger also broke down as he pleaded to be reunited with his two children. Matthews said, “I am not the violent one, I assure you, and I don’t want have to prove that. I do not want to have to go down that road.” He also alleges that JWoww told their two-year-old and four-year-old children, “Your father’s a piece of s**t, he’s out of here. I’m sorry I ever had children with him.” Roger ended up staying at a friend’s house, but didn’t have a plan other than to miss work today.

Later on Saturday, Roger posted a photo of him and his son Greyson with the caption: “Heart half full.”

To make things even more confusing than they already are, Snooki posted a video to defend JWoww. Nicole “Snooki” Polizzi posted a surveilance video from Farley and Matthews’ house showing JWoww talking to police.

“My best friend has been going through A LOT these past few months and my heart breaks for her,” Snooki wrote in the Instagram post. “She always tries to keep her situations off social media for the sake of the kids, but her voice needs to be heard too. She has tried everything in her power to keep things civil FOR THE KIDS and she’s a damn good mother. She doesn’t leave her kids for months at a time for work. She leaves filming to care for her children that you don’t see.”

“Her character is being tarnished and I’m here to show what’s really going down,” Snooki continued. “She wants nothing but for the kids to have their dad. Unfortunately she was being taunted and baited & this was the result. YOU’RE AN AMAZING MOTHER AND PERSON and all of us who truly know you know this. There is more to the story that’s being told. Stop attacking her.”

Stay tuned to see if this awful situation gets resolved reasonably.