Jennifer Lawrence Got Drunk On Rum With Stephen Colbert, Told Her Haters To Not See ‘Red Sparrow’ 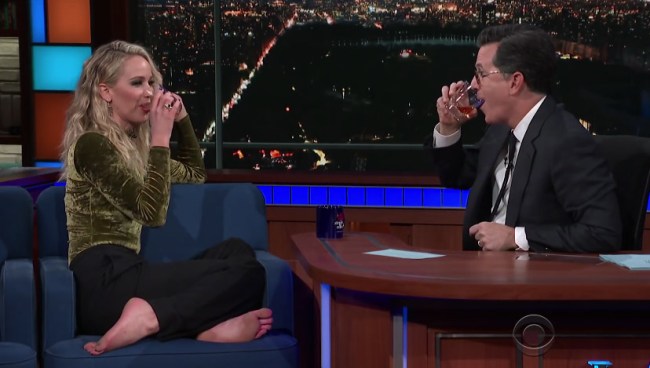 Jennifer Lawrence, as we well know, enjoys a little tipple now and then. It just doesn’t usually happen on national television like it did on Monday night when she appeared on The Late Show with Stephen Colbert.

Lawrence is nearing the end of her Red Sparrow press tour (it hits theaters on March 2), so she was already a little loopy when Colbert decided to break into his Mad Men-esque hidden stash of alcohol behind his desk and brought out a bottle of rum.

At first, Lawrence didn’t seem to like the taste of the rum, but very quickly overcame that, eventually doing at least three solid shots of the stuff.

“Turns out I really like rum,” said a surprised Lawrence as Colbert poured another shot. “You know what, I like vacation me, so why wouldn’t I like rum?”

“I want to go on vacation with you,” cracked Colbert. 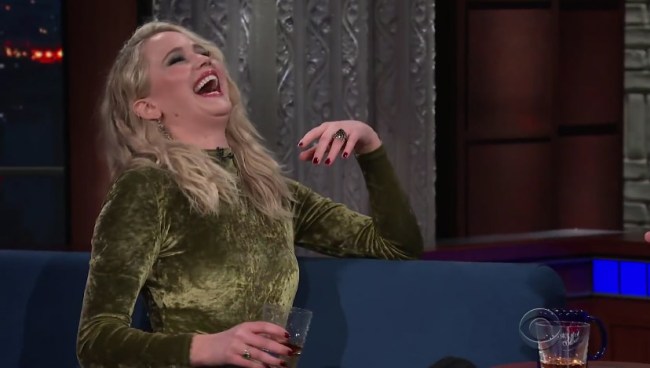 Yes, she was definitely feeling it by that point, having already kicked her shoes off. Oh, by the way, vacation Jen is named “Gale.”

When they came back from commercial break Lawrence and Colbert were doing yet another shot of rum and finally got around to talking about Red Sparrow.

Describing the movie, Lawrence told Colbert, “It’s a psychological spy drama, I’m a woman, but it’s not like, uhhhhh [waves hands crazily over head], it’s entertaining, don’t put any political weight on it. If you’re a typical [makes quote marks with hands] hater, and you have a blog, don’t go. You’re officially, totally uninvited. I would like to officially uninvite all my haters to go see Red Sparrow,” said a giggling Lawrence. “I had two shots of rum and I’m talking about haters!”

“You’ve had more than two shots of rum, I promise you,” replied Colbert.

Colbert should just give rum to all his guests from now on. The ratings would go through the roof.