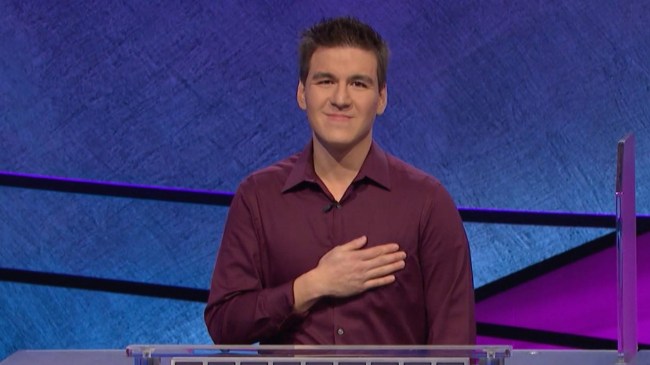 Jeopardy! contestant James Holzhauer continues to bulldoze over the quote-unquote competition. On Monday night, Holzhaur did what he does best — dominate. He won $90,812, which puts his Jeopardy! prize money near $1 million.

Holzhauer is a 29-year-old professional sports gambler who has blown away all competitors in his 13 days of complete and total annihilation. He set the single-show prize money record by snatching $131,127 in winnings and has a grand total of $942,738. If Holzhauer continues at this breakneck pace he is on track to topple the records held by Jeopardy! legend Ken Jennings.

Jennings gave an interview to Wired where he said he’s “just gobsmacked by James.” “It’s absolutely insane what he’s doing,” Jennings said. “Like, I thought I had seen everything on Jeopardy!. And this is something I would have thought was just impossible, these numbers.”

“Statistically, he’s playing at as high a level as anyone who’s ever played the game,” Jennings added. “And then he’s got these incredibly confident wagers. He’s maximizing money. He can make two or three times what any other player ever has with that same level of play, which again is top-shelf. He’s as good as anybody.”

Jennings gave Jeopardy! players his advice on to even think about beating the current champion. “The main thing is not to take yourself out of the game,” Jennings advised. He added that intimidation is a huge source of power for a returning champ. “That’s a huge part of the streak: People thinking, ‘Well, I can’t beat this guy.’ It becomes a self-fulfilling prophecy.”

Jennings said he looks forward to playing against Holzhauer in a future tournament and that the tournament format poses problems to “go big or go home” champion. “In a tournament scenario, James loses some of his edge,” Jennings said. “He can’t take a lot of money off the board and put his competitors out of commission before the first commercial. So that’s not a strategy you can count on anymore.”

“You need to pick your spots and bet big when you identify them,” Holzhauer told NPR. “That’s basically my Jeopardy strategy in a nutshell.” He has answered 29 of 32 Daily Doubles correctly, making $281,150.

Holzhauer, who has a degree in math from the University of Illinois, has also had success in implementing the “Forrest Bounce” strategy where the contestant jumps around from category to category in an attempt to throw off their opponents.

“All good professional gamblers are selectively aggressive. You need to pick your spots and bet big when you identify them,” Holzhauer said. “That’s basically my Jeopardy strategy in a nutshell.”

Holzhauer, who was a Las Vegas professional sports bettor, said he would “love to have the chance for a head-to-head death match” against Ken Jennings.

James is already up to 10 wins! How far will he go? pic.twitter.com/dn1nsUWYkq