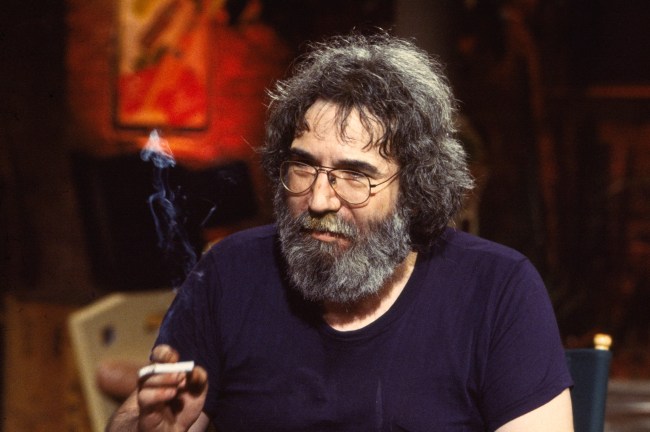 The term counterculture usually refers to the tie-dye and LSD-soaked 1960s San Francisco scene that gave birth to the hippie movement. The politically-charged post-Kennedy years when the Baby Boomer generation went to college and war to a soundtrack of psychedelia. The Haight-Ashbury scene, the Summer Of Love, and the beginning of a long, strange trip in the White House with Richard Milhous Nixon.

One of the most distinguished alumni organizations of that scene?

The Grateful Dead, with Garcia’s dizzying guitar licks and gregarious personality, a big part of the band had cultural staying power.

Jerry Garcia talks to MTV for the first time

In 1983, Jerry Garcia sat down with Nina Blackwood for an interview on MTV. The ’60s were long in the rearview mirror. Watergate happened. The Vietnam War pittered out. Jimmy Carter’s bungling of the Iranian Hostage crisis leads to the curtain rising on the Reagan ’80s.

The cable network was only two years old at the time. Blackwood was one of MTV’s first original VJs. Her interview Garcia marked her first on-air interview with a musician. The interview takes place on June 2nd in New York City at Teletronic Studio, presumably between Jerry Garcia Band shows at the now demolished Roseland Ballroom on 52nd Street and the now-demolished Capitol Theatre in Passaic, New Jersey. Here’s a link to a picture, via Institute for Jerry Garcia Studies, from the day.

The full 30-minute interview is remastered and archived on YouTube and is worth the watch. It’s a historical artifact for Deadheads, as Blackwood covers a lot of ground in Garcia’s first MTV sit-down.

She asks about the Grateful Dead’s plans to explore new musical mediums like music videos, which manifests with “Touch Of Grey” and MTV’s Day Of The Dead four summers later. She asks Jerry about the Grateful Dead’s studio albums and if they capture the band’s essence: “No, no. Not at all. Not at all. Because when we go into the studio, we turn into… these scientists… the record is really not quite the right medium for us.”

Speaking about how the Grateful Dead is an acquired musical taste, Jerry speaks into existence the iconic licorice metaphor, beloved by generations of Deadheads to describe their aural palate: “Not everybody likes licorice, but the people who like licorice really like licorice.”

Jerry Garcia on the Grateful Dead’s sound in the 1980s

Blackwood also asks Garcia about how the Grateful Dead’s music has evolved with the musical fabric of the time. The Dead had released Go to Heaven, their 11th studio album, three years before, marking the band’s first album with keyboardist Brent Mydland. Instant classic Garcia-Robert Hunter tunes like “Althea” and “Alabama Getaway” were already prominently featured in the Dead’s live song rotation.

Nina Blackwood: How do you feel the Grateful Dead fit into the music of the 80s?

Jerry Garcia: Well, it’s Grateful Dead music of the 80s. You know, I just because it definitely changes. I mean, we – everybody has ears, you know We were affected by whatever happens in music. We’re exposed to it. We’re freely influenced. We steal from everybody. So, you know, it’s the 80s. The 80s version of us. It certainly has sounds and textures and stuff that belong to the 80s that make it different, say, from the Grateful Dead of the ’70s or whatever.

In the interview, Nina Blackwood follows up with a question about counterculture. It’s a bit off-topic – a bit of a dud of a question after Jerry started talking lucidly about music – clearly his passion.

Jerry Garcia shoots back, gracefully: “No, there’s an 80s counterculture…”

Then he expanded on why he doesn’t like the term counterculture.

“I don’t like that counterculture idea. It’s not as though there were a culture to be counter to, you know what I mean? There’s the range of the American experience. Down at the shallow end or something, there’s… There are these margins and somewhere in the margin I think is where the Grateful Dead and the Deadheads and whatever it is that we are part of. ‘Cause I feel, yeah, I feel that we’re part of something, but I don’t feel that it’s this banner that we’re carrying along this banner, that’s this relic from the 60s. It doesn’t feel that way at all. It isn’t like that.”

Garcia continues, true to his articulate self:

“The Grateful Dead.. we’ve moved through these periods of time… The 60s, that period of time, they call the 60s that period. They call the 70s or whatever – the emptiness they call the 70s and so forth. I mean, we’ve never felt attached to that stuff going on around us really. Our directionality and our… The thrust of what we’re doing has remained pretty much, pretty similar to the way it’s been, to the way it was when we started it. Time has produced maybe a little clearer focus – maybe a little bit better, a little bit closer to an idea that we think is out there.”

Nine Blackwood: Put them all together and continue on.

Jerry Garcia: “So far it’s all been working, you know, amazingly enough.”

Nina Blackwood: Do you think you’re gonna be together for a while? Like the band will go on and on.

While the idea of the counterculture was important to rise and prominence of the Grateful Dead, by the ’80s Jerry seemed to move on and not want his entire identity wrapped up in it.

A couple of years later, in a 1985 interview with Guitar Magazine, Garcia was asked how he would like to be remembered. When it came to his own legacy, being a part of a counterculture was the furthest thing from his lips.

“As a pretty okay musician. I don’t really expect to be remembered—that’s way ahead of me. I’m still trying just to get good. If I get good, then I might say I hope people remember how good I am. The idea of being remembered would be embarrassing to me at this point. It’s like, remembering is dangerous.”

Years later, before his death in 1995, he changed “pretty okay” musician to a “competent” musician.

“I don’t want people agonizing over who or what I was when I was here when I’m not here anymore,” Garcia waxes, shrugging accolades off.

“I’d like to be thought of as a competent musician.”