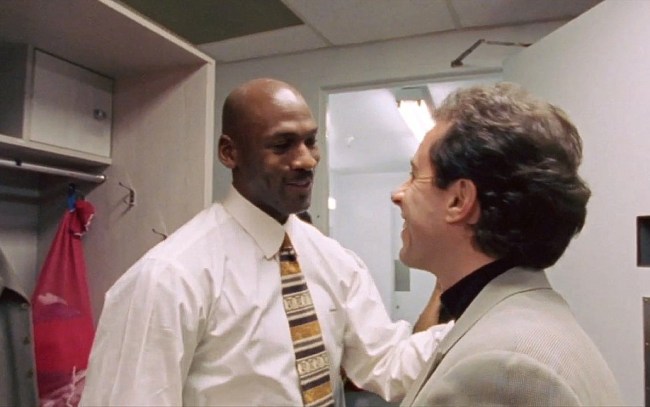 Jerry Seinfeld has had himself a hell of a week. Not only did the famed 90s sitcom star make a cameo appearance in the massive cultural phenomenon that is The Last Dance, but his first new stand-up special in 22 years hit Netflix on Tuesday. It’s… okay. The reviews are mixed, to say the least. While I found some jokes decently funny, now is just not the time for Seinfeld’s whole “crankily complaining about the minor inconveniences of daily life” shtick. I’d kill to be sucked into plans that I want to cancel and arguing about splitting Ubers right now.

So, if you want to check out 23 Hours To Kill, have at it. But that’s not why we’re here. We’re here to talk about the previously aforementioned cameo in The Last Dance, a far more interesting topic than Seinfeld’s current 66-year-old routine.

Back in the 90s, if there was one person whose fame rivaled Michael Jordan, it was Jerry Seinfeld. Similar to Coca-Cola or McDonalds, Seinfeld and his sitcom become a brand in and of itself. People lined the streets of Times Square to watch the finale.

Seinfeld was so famous, in fact, that he even had the balls to tease MJ that his final season — the ninth season of the beloved sitcom that also happened in 1998 — would be bigger than Jordan’s final season with the Bulls.

“Were you scared of Phil Jackson?” Kimmel asked Seinfeld.

“No. Just too tall,” Seinfeld replied.

Kimmel pointed out that Seinfeld seemed confused in the locker room as pregame preparations were ramping up.

“It’s not a place I would normally be,” Seinfeld said. “I think I had another conversation with [Jackson] because that was his last season (with the Bulls) and I was in the middle of my last season (of “Seinfeld”) and I remember teasing him about, ‘Who do you think is going to end bigger?,’ him or me.” [via NBC Sports]