Jen Harley Shares Photos Of Bruises Before Court Date, Claims Snooki Could Have Cheated With Ronnie 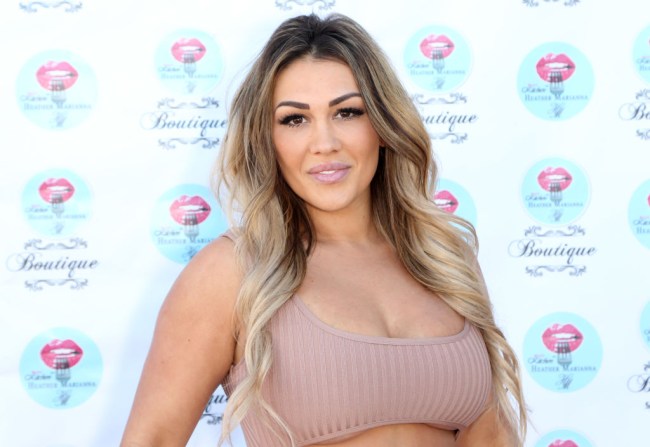 You’ll never believe this, but… Ronnie from Jersey Shore is currently embroiled in a vicious battle against an ex-girlfriend. Shocking, I know. Ronnie Ortiz-Margo and his baby mama Jen Harley have very bad blood between them, and the drama is heading to a courtroom.

Harley posted photos of bruises on her body including a black eye on an Instagram Story. She claims that she suffered the injuries from a fight she had with Ronnie back in October.

Can you tame this tiger 🐅 | @fashionnova ambassador #herekittykitty🐾

“Black eye lol #itsalwaysbeenyou,” Harley captioned the pic of her injured eye. Then there was a photo of a bruise on her ribcage that she captioned: “My body bruised and beat #Dec20.”

The Jersey Shore: Family Vacation star was arrested in October for a domestic violence situation where he allegedly attacked Harley, had a knife, and barricaded himself in a room with his daughter at an Airbnb in Los Angeles. In November, the 34-year-old Ortiz-Magro pleaded not guilty to seven misdemeanor charges of domestic violence and child endangerment.

Jen shared photos and videos of Ron appearing to be intoxicated. She included the captions: “When your baby dad strung out and high af right before court in Miami Lmfao” and “sober or nah? #dec20.”

The December 20th date that Jen mentions is likely in reference to a court date. Margo may have a court order to abstain from drugs and alcohol following the violent episode in October. Jen could be setting up to go after Ortiz-Margo in court, possibly stopping him from having more time with their daughter. It is not going to be a Merry Christmas for the former couple.

Ron didn’t seem to be worried about the upcoming court date and shared a photo of him partying on a yacht on Sunday, maybe indulging in some Ron Ron juice.

A month ago, Ron posted an Instagram pic that simply said, “I forgive you, but stay the f*ck out of my life.”

Everyone say it with me!

Jen is not just warring with Ronnie, she fired back at his Jersey Shore castmate Snooki. Nicole Polizzi hinted that earlier photos of Jen’s bruises may have been staged during her podcast It’s Happening with Snooki & Joey.

“She’s out to lunch with Ariana, she’s wearing a tank top and shorts and she has bruises everywhere,” Polizzi said on her podcast. “I feel like she went out intentionally to get a photo of her. You don’t have to be wearing a tank top, showing off your bruises and the bruise on your leg. She’s wearing booty shorts to show it off. Like, ‘Girl, you can go out with your daughter and have lunch but cover those up so it’s not a thing.’ She wants it to be a thing.”

Harley hit back with allegations that Snooki was trying to have an affair with Ronnie during the filming of Jersey Shore: Family Vacation. “FYI I have screenshots between Ron and TJ when you guys were in Miami and Ron saying omg I could’ve F–KED the s–t out of Nicole tonight,” Jen alleged.

Polizzi is married to her husband Jionni LaValle, and they have three children together. Last week, Snooki said she was retiring from Jersey Shore to spend more time with her family.

Its beyond hard to get back into the gym after having a baby. Especially being a mawma of 3. The schedules of the kids are insane, you’re tired most of the time & completely shot. BUT, it’s happening! I’m getting my ass to the gym 5 days a week & need to be a healthy/strong mawma! Shit ain’t easy, as i almost wanted to throw up a dozen times. Let’s keep pushing ourselves, mawmas! #fitmom (Don’t mind my laundry basket, it’s folding day🙄)

Jen wasn’t done at making accusations that Snooki cheated. “And thanks for victimizing me after he beat my ass in front of my daughter!” Harley wrote to Polizzi. “You are a real bully. Honestly I did nothing to you.”

Daddy-O You got the swagger of a champion.. @fashionnova ambassador

Well, at least Sammie Sweetheart seems to be enjoying life.