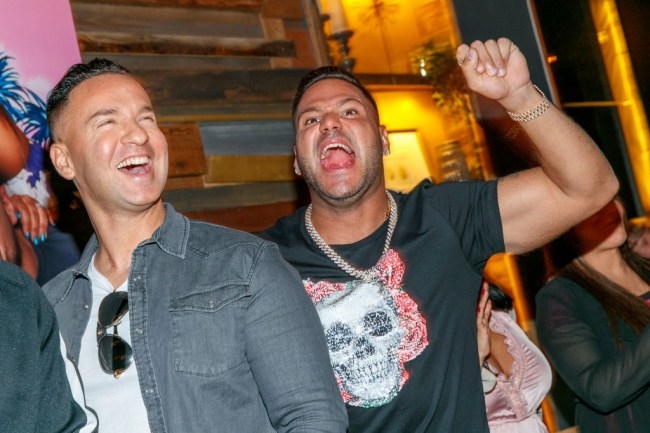 Ronnie Ortiz-Magro has been arrested and reportedly charged with kidnapping and domestic violence. The Jersey Shore Family Vacation star was allegedly so uncooperative during the arrest that police were forced to tase Ronnie and handcuff him to a gurney according to TMZ.

Police were called to an Airbnb home in Los Angeles at around 2:30 A.M. local time on Friday morning following multiple 911 calls. Ronnie’s ex-girlfriend and baby mama Jen Harley called authorities because she was fearing for the safety of herself and the couple’s 18-month-old daughter. Neighbors also called the Los Angeles Police Department to report a woman, presumably Jen Harley, screaming for help.

According to Harley, Ronnie punched and slapped her after the Jersey Shore star allegedly used cocaine. One witness told police that a woman came to their door and saw a shirtless man attack her. Jen claims that Ronnie chased her around the house while armed with a knife and while holding their child.

Ortiz-Magro reportedly barricaded himself and his infant daughter in one of the rooms of the Airbnb in Hollywood Hills. Ronnie refused to open the door, so cops were forced to break down the door. According to LAPD, Ortiz-Magro was combative with police, and they tased the 33-year-old reality TV star to subdue him.

Ronnie was apparently so out of control that police handcuffed him to a gurney. He was loaded onto an ambulance and taken to the hospital to be evaluated.

Just One Station @FOXLA and exclusive pictures as Jersey Shore star Ronnie Ortiz is handcuffed and taken into custody in domestic violence incident— our @GigiGraciette with the breaking details @GDLA pic.twitter.com/xzc94kZXBu

EXCLUSIVE:
Jersey Shore’s Ronnie Ortiz in handcuffs after 3am domestic violence incident. Woman reported being assaulted + that Ortiz had her baby inside home. Police say he wouldn’t come out so they broke down door to rescue baby. Coming up live on @FOXLA #JustOneStation pic.twitter.com/Iy6xNg2CJr

The Jersey Shore Family Vacation star has since been released from the hospital and was booked on the charges. Ronnie’s bail was set at $100,000.

Oddly enough, Ronnie and Jen were seen out in public in West Hollywood looking happy together, holding hands and smiling, only hours before the domestic violence incident. “We’re always good,” Jen and Ronnie said of their relationship.

“Me and Jen have a strong love for each other,” Ronnie told E! a day before the arrest. “What the show portrays and what we really have for each other are two completely different things. They ask why do we stay with each other? And it’s because we know what we have is real. And at the end of the day, people don’t see what we have, they see what MTV wants you guys to see.”

Ronnie and Jen have had a tumultuous on-again, off-again relationship. Ronnie from Jersey Shore accused Jen of domestic battery after she allegedly threw an ashtray at his head at a New Year’s Eve party in Las Vegas. Ronnie was bleeding and had visible injuries on his face. Harley was cleared of any wrongdoing in July.

There is also a video of Ronnie punching and smashing a Ring home security camera at Jen’s Las Vegas home. Ronnie was named as a “person of interest” in the robbery of Jen Harley’s home last January. Once again, the Ronnie and Jen show is more entertaining than Jersey Shore.