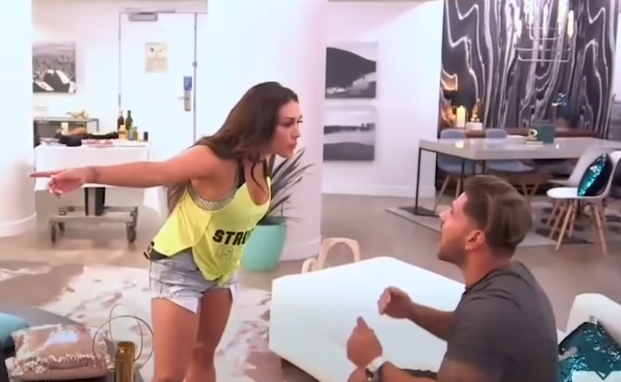 There is so much drama between Ronnie Ortiz-Magro and his baby mama Jen Harley that their escapades are worthy of its own spin-off TV series. Harley, the on-again-off-again-and-off-again girlfriend of the Jersey Shore star was arrested on Thursday morning in Las Vegas.

Las Vegas Metropolitan Police Department records show that Harley was arrested on a charge of battery domestic violence from an ugly incident from months ago. Oddly enough, it was Jen who called the cops who ultimately arrested her.

TMZ is reporting that Harley called the police to report someone was near her house with a gun early Thursday morning. LVMP arrived at her home and did a background check on Harley, which turned up an outstanding arrest warrant for a physical altercation she had with Ronnie on New Year’s Eve. ProTip: Don’t call the police when you have an outstanding arrest warrant, especially in the same city as your warrant.

While ringing in the new year at the Hustler Club in Las Vegas, the explosive couple got into an argument. Harley reportedly threw an ashtray and hit Ronnie in the head with it. The Jersey Shore Family Vacation star suffered injuries on his forehead, nose and lip. Ortiz-Magro then filed a police report against Harley for battery.

A Las Vegas Metropolitan Police Department spokesperson confirmed that Ronnie filed a battery domestic violence report against his then-girlfriend for an alleged battery that went down on December 31, 2018, at approximately 11:43 p.m. inside the Hustler Club. The allegations are currently being investigated by detectives. Video from the establishment shows Ronnie leave the club holding his bloody face from his injuries.

On the very same night at around 2:15 AM, Harley alleges that she came home and found her house trashed. She accused Ronnie of ransacking the house, which included smashing a flat-screen TV, destroying picture frames and breaking a vase. Ronnie was named as a “person of interest” by authorities but not a suspect because there was no evidence or witnesses.

On December 4th, a security camera at Jen’s house captured footage of Ronnie smashing the security camera at her front porch. Ronnie allegedly also threw an object through the window. Harley filed a police report for the incident.

Ortiz-Magro claimed that has been assaulted by Harley last year and shared images of his injuries that included a black eye on Instagram. There’s also a worrisome live-stream video of the two getting physical and another video of them arguing from last October.

RELATED: Sammi Sweetheart Won’t Be Part Of The ‘Jersey Shore’ Reunion And It’s For The Reason You’d Expect

Last June, Harley was also arrested by the LVMPD on one count of misdemeanor domestic battery after allegedly dragging Ortiz-Magro with a car.

The couple have always been volatile and would constantly fight, even when filming Jersey Shore. Rahn stahp, you’re traumatizing the rest of us, find a good girlfriend.

Harley was held on $3,000 bond, but appears to be out of jail because she’s on her Instagram selling detox tea as pseudo-celebrities are apt to doing on Instagram.

RELATED: Mike ‘The Situation’ Sorrentino Gets Married Before The ‘Jersey Shore’ Star Must Go To Prison

In other Ronnie news, he is currently filming Season 3 of Jersey Shore Family Vacation. Ortiz-Magro has slimmed down for the upcoming reality TV show by cut down on the Ron-Ron juice and by getting liposuction.

Las Vegas plastic surgeon Dr. Christopher Khorsandi performed the procedure, that he said was innovative. “We’re going to do something for Ronnie today that wasn’t even available 10 years ago,” said Khorsandi. “When you wake up, you’re going to have a six-pack.”

RELATED: ‘Jersey Shore’ Family Send Love To Mike ‘The Situation’ Sorrentino As He Goes To Prison, Here’s What He’ll Eat In Jail