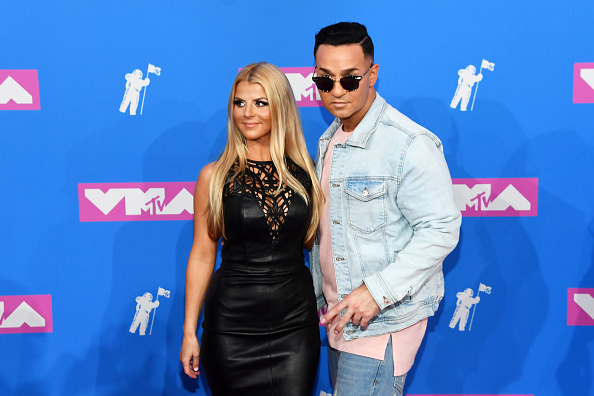 Mike “The Situation” Sorrentino absolutely knew that right now was the best time for him to get married. The Jersey Shore star couldn’t wait to wed his longtime girlfriend Lauren Pesce because he had so much love for her and couldn’t delay making her his wife any longer. Also, The Situation wanted to get married before he was hauled off to prison, which really helps when you’re trying to decide a time period of when you should get married.

Sorrentino married Pesce in a lavish wedding ceremony on Thursday at The Legacy Castle in Pompton Plains, New Jersey. Wedding prices are so expensive that even successful MTV reality stars have to take a cheaper Thursday wedding date. The happy couple are seen with smiling ear-to-ear.

“Today I marry my best friend , My College Sweetheart, My everything,” Mike wrote on Instagram to his beautiful bride. “Together as a team we can accomplish anything. I am so grateful that you are by my side. I promise to be my best self everyday & make you proud to call yourself Mrs. Sorrentino. Love you with all my heart. Here’s to our big day.” I’m sure The Situation’s wedding had a fantastic food spread.

Sorrentino and Pesce met in math class at community college before Mike became a reality star on Jersey Shore. “We went out together for about four years, and then once Jersey Shore started we decided to take a break throughout seasons 1-6,” he told PEOPLE. “Once [the show] was over, we eventually reconnected and have been together ever since, for over four years now.” “She’s my best friend, my better half,” Mike said. “She makes me a better person. I’m so excited that she’s in my life.”

The Sitch proposed to Lauren on Valentine’s Day this year in a “romantic” moment that happened during the filming of Jersey Shore Family Vacation. Pauly D, Vinny, and the rest of the GTL crew helped decorate the house for the sentimental occasion.

After the proposal, they quickly starting wedding planning because of impending prison sentences really motivate a couple to tie the knot. How much fun must this wedding planning have been?

“Mike, I was thinking about a winter wedding in maybe January or February with a white theme?”

“Well, Lauren, how about when it’s warmer?”

“Okay Mike, how about a springtime wedding when everything is blossoming just like our love?”

“Fine, a November wedding it is.”

The Situation and his older brother Marc Sorrentino were indicted in September of 2014 for tax offenses and conspiring to defraud the United States after failing to pay $8.9 million in taxes on income made between 2010 to 2013.

The Jersey Shore crew were also at the courthouse in downtown Newark, New Jersey, to support their reality show brethren.

“He looks forward to completing his sentence and coming home to Lauren, family and friends,” Mike’s rep said. Jokes aside, congratulations to the newlyweds!