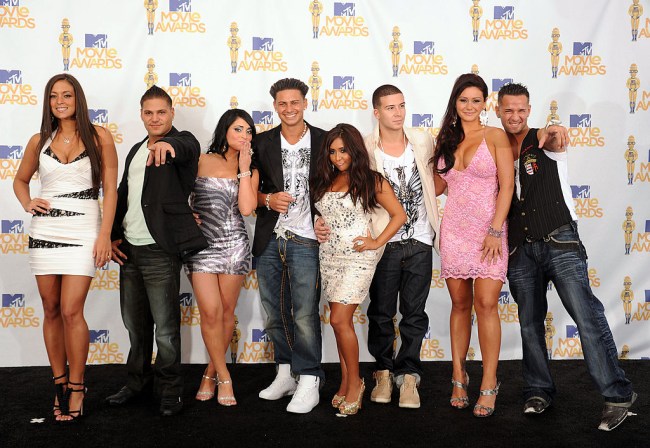 Vinny Guadagnino has never been in better shape than right now and he credits his keto lifestyle, which he has pretty much his entire brand. Vinny, who is now known as the “Keto Guido,” inspired another Jersey Shore star to adopt a keto diet and Angelina Pivarnick has already lost 20 pounds on low-carb diet.

Angelina and Vinny have always had a love-hate relationship, sharing flirtatious stares and friendly insults at each other. Now they’re sharing diet tips and keto recipes.

“So I listened to Vinny, which is so cute and I sort of did half keto,” Pivarnick said. “On Sundays, I gave myself a cheat day, which I think Vinny does, too.”

“I basically followed what Vinny told me to do,” the Jersey Shore star said. “Never in a million years would you think that I would be listening to Vinny.”

The Staten Island native posted a video on Instagram with the caption: “Very happy with my current weight loss. When u try u succeed :))).”

Angelina got engaged to Chris Larangeira in January of 2018. She is possibly getting married very soon with a fall 2019 wedding and that could be the reason for the sudden weight loss.

On Sunday, Pivarnick looked anything but a dirty little hamster as she appeared on the red carpet for the MTV TV & Movie Awards in Santa Monica, California. She appeared alongside Jenni “JWoww” Farley, Deena Nicole Cortese, and Lauren Sorrentino, Mike “The Situation” Sorrentino’s wife. The Sitch was unable to attend the festivities as he is currently incarcerated at the Otisville Federal Correctional Institution in Orange County, New York.

RELATED: ‘Jersey Shore’ Family Send Love To Mike ‘The Situation’ Sorrentino As He Goes To Prison, Here’s What He’ll Eat In Jail

My resting bitch face was a whole mood 😂😂😂 this is what happens when I don’t wear my glasses and can’t see anything 🤷🏽‍♀️ shout out to these three beautiful ladies @deenanicolemtv @lauren_sorrentino @angelinamtv 🥰🥰 Side note: I was fangirling hard over @strangerthingstv and @sabrinanetflix and of course Deena walks over to @kiernanshipka and says “jenni is a huge fan… can she have a pic” low key wanted to hide but also THANK YOU DEENA 🙌🏼🙌🏼🙌🏼🙌🏼

Vinny would probably argue that there is no such thing as “half keto.” In order to achieve ketosis, you have to cut out carbohydrates, consume as little sugar as possible and incorporate some fasting into your daily routine.

Vinny has lost 50 pounds thanks to his Keto Guido diet and shares incredible before-and-after photos on his Instagram.

I’m not someone who can eat whatever i want and remain thin…With my genetics , if I look at a piece of bread I gain weight . So if I tell you that a way of eating causes real results, I mean it …i have to work for anything i have… I’m also natural and have never taken any supplements or steroids…. _ Im not saying if you “go Keto” you’ll automatically get skinny and ripped. It still takes work( especially at first ) to navigate through this sugar and grain world …it also takes hard work to fast, suffer in the gym and exercise , get good sleep, not party all the time , and live a balanced healthy life….but for me , #keto is the only way of eating which easily serves as a foundation for my healthy lifestyle to function. It’s sustainable and enjoyable. #ketoguido

On his Keto Guido Instagram page the 31-year-old Jersey Shore: Family Vacation star shares ketogenic-friendly recipes and foods that are “sugar-free, grain-free, and not chemically processed in a lab.”

You know what my favorite part of the #ketoguido way of life is ? I get to EAT! I’m a fat kid at heart foodie who loves to EAT! Sugar free , grain free, chemically processed in a lab free foods…but that leaves hundreds of other delicious dishes to eat with all sorts of meats, veggies, and fat _ This way of life is NOT for people who aren’t foodies and want to spend the rest of their life meal prepping, eating brown rice and bland chicken,and counting calories and macros …I can do that at certain times of the year to hit a goal but I don’t think humans were evolved to track our calories and macros with an Iphone app 365 days a year , 24/7 …we were evolved to hunt and gather (aka be active) fat, protein, fruits and vegetables, nuts and seeds… and to FAST (the time it took before they can hunt and gather their next meal) … if you bought a pet lizard, you would set up a little tank that emulates his natural environment that he was evolved to be in .. give him a little heat rock, sand , put little plants , feed him crickets and shit ….well although we evolved to be modern humans who live in houses and watch porn, millions of years of evolution has also left us with an animal brain and body who’s gut bacteria still needs what it needs like our little lizard friend.. this doesn’t include candy bars, hydrogenated vegetable oil , yogurt with 15g of sugar in it , chips, and fast food….sitting at desks, staring at screens, playing video games , not getting sunlight. _ So everyone will ask , do you count your macros and calories ?! And my answer will be sometimes I do if im hitting a clear goal or I was just getting started with #keto and wanted to make sure i was doing it the right way . But all the other days of the year I’m emulating my ancestors’ way of life and being active , fasting , and eating real , whole, foods when I’m hungry, and stopping when I’m full . And I believe this is the right way because my body naturally falls into a caloric deficit this way, and it’s easy to just look at my plate and see that I’m eating the right macros… effortlessly … #ketoguido #cleannotlean

After i drink a few vodka sodas on #sundayfunday I go to sushi places and tell them to take the rice out of my Philadelphia hand rolls and add avocado instead . 🤷🏻‍♂️ #cleannotlean #ketoguido

I love poke bowls and all of the make your own bowl options that we see more and more at restaurants. This gives you the option to say no to the rice and instead load the bowl with good stuff like protein, fat, and veggies . However you usually have to double the meat, because once you get rid of the starch base, you realize how little food these companies have to give you when they are loading your bowl up with cheap carbs so they could maximize profits . I end up paying more and only get half the dish! Just giving you guys more options to eat out ! #noexcuses #ketoguido

“It still takes work — especially at first — to navigate through this sugar and grain world,” Vinny says of his new healthy lifestyle that has obviously gotten results for him.” “It also takes hard work to fast, suffer in the gym and exercise, get good sleep, not party all the time, and live a balanced healthy life … but for me, keto is the only way of eating which easily serves as a foundation for my healthy lifestyle to function. It’s sustainable and enjoyable.”

MTV announced that the second half of Season 2 of Jersey Shore: Family Vacation will premiere on July 11, 2019.