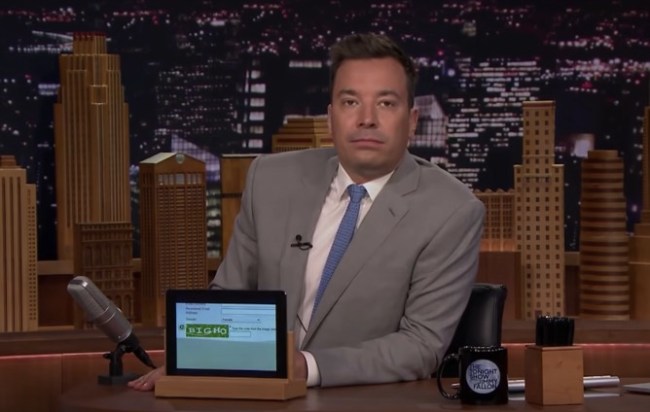 Jimmy Fallon has one of the hardest jobs in show business. Since taking over The Tonight Show in 2014, Jimmy’s put out nearly 900 episodes. He has a team of talented joke writers who help him craft a nightly monologue and recurring sketches but it’s the latter where Jimmy has seen the most success.

There’s an entire Wikipedia page devoted to the massive list of recurring sketches that Fallon features on his show, and amongst those is a bit where he shows a random CAPTCHA image that’s funny or shocking in some way. As it turns out, Jimmy Fallon tells the exact same joke every single time he busts out this ‘CAPTCHA’ recurring sketch. Someone put together this clip which is now up to nearly 50K views showing Jimmy telling the same joke over and over again:

I’m not a Fallon hater at all. I generally enjoy his show and I share his clips regularly here on BroBible, so I’m actually a little surprised at myself for never catching on this. I’m guessing that these recycled jokes were spread out across multiple seasons but I could easily be wrong about that. This could also be a sketch that they substitute on nights when whatever main sketch they wanted to feature fell apart for whatever reason so they fall back on this. Who knows, maybe it’s just laziness. Like I said above, producing a fresh show 5 days a week, every singl week, is the hardest task in show business.