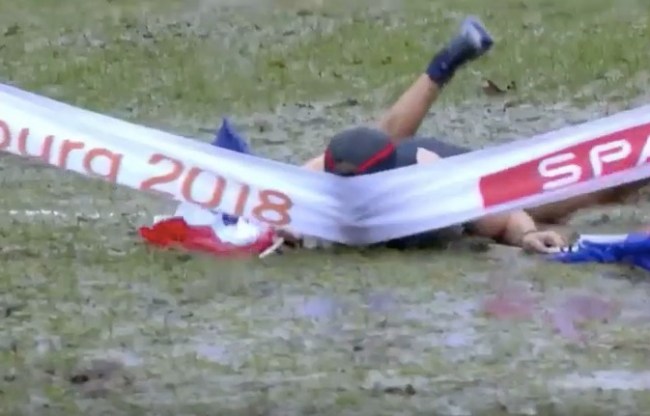 The SPAR European Cross Country Championships were held last weekend and everything was going perfectly right up until the finish line for French runner Jimmy Gressier who successfully defended his U23 title. Instead of running through the ribbon he fell flat on his face while trying to celebrate and instantly became a relatable meme.

With the end in sight, French cross country runner Jimmy Gressier picked up two French flags to carry across the finish line in celebration. At the last moment, he tried to speed up and slide across the line on his knees.

The ground was wet and muddy. Instead of gracefully gliding across the finish line, Jimmy instantly busted ass and then fell on his face with all of the cameras watching. He dropped the flags. The commentators were laughing. And as soon as the footage hit Twitter, Jimmy Gressier became a relatable meme for anyone who’s ever tried to celebrate success in life only to wind up failing miserably.

Let’s check out the initial clip of Jimmy Gressier completely owning himself at the finish line and then we can check out the best Twitter responses to this incredible FAIL clip.

The celebration didn't go according to plan but his performance was brilliant!

Jimmy Gressier produces a front-running display to defend his title in the U23 race at the SPAR European Cross Country Championships. #Tilburg2018 pic.twitter.com/GHuBSOya6w

The saddest part here is that I’m sure this dude’s a badass athlete. He won back-to-back U23 European championships by successfully defending his title two years in a row. Now, he’ll forever be this guy:

How not to finish a cross country race. 🙈#Tilburg2018 pic.twitter.com/2kJ3I6WOFb

As you can see, a lot of people find this FAIL pretty damn relatable.

if a 15 second video could sum up my life, it'd be that. https://t.co/WBEznSmgaL

Me tryna slide into the DMs… https://t.co/GdivdBkj0j

When your EU-approved Brexit deal gets voted down by the Commons https://t.co/4ydUNT2rud

When ya girl says, “Come over, my Daddy ain’t home” …until you drive down the street and see her Daddy’s car outside 🤦🏽‍♂️

Me doing literally anything. https://t.co/I8PWp0lhiJ

This one pretty much sums up 90% of the population, myself included.

Heading into the final weeks of the year like this guy https://t.co/sKsJGd7M3Y

Visual description of me passing an exam https://t.co/MrKAffJQPs

This will not get old https://t.co/O0GnRyAsAk

They’re not wrong. This might actually be the best race finish ever.

Best finish of all time. https://t.co/ZO2JpTPF6l

There are thousands of responses to these tweets and they’re all good. It’s clear that almost everyone on Twitter seems some version of themselves in this finish line FAIL.

Everyone can laugh but at the end of the race he crossed the finish line first and successfully defended his title. He’s the winner. His name is in the books. So he gets the last laugh here despite becoming an overnight meme sensation. (h/t Twitter Moments)