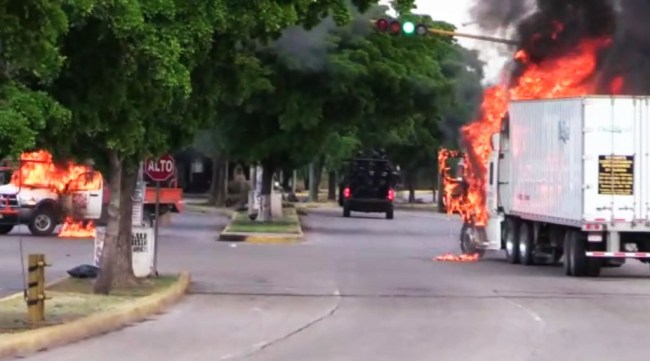 Reports out of Mexico are claiming that Ovidio Guzman Lopez, the son of Sinaloa Cartel drug lord El Chapo. On Thursday, videos from the northern Mexican city of Culiacan show civilians running for their lives as firefights broke out in the streets.

Terrifying videos and photos show dump trucks with heavily-armed soldiers inside, cartel members firing .50 cal rifles, pickup trucks with a large mounted gun on the bed, sicarios in action, and vehicles on fire. The urban warfare waged on for several hours according to several reports as smoked billowed and gunshots rang out.

People hiding inside what appears to be a super market as drug cartel violence erupts in Culiacan, Sinaloa after the Mexican government arrested El Chapo's sonpic.twitter.com/zUiEFffHpb

Vice News reporter Keegan Hamilton reported that El Chapo’s 28-year-old son Ovidio Guzmán was captured by the Mexican military and his apprehension has been confirmed by U.S. officials.

US law enforcement official tells @vicenews it's "100% confirmed" that Ovidio Guzmán is in Mexican custody.

#BREAKING: Two sources confirm to @vicenews that this picture shows El Chapo's son Ovidio Guzmán today after he was captured by the Mexican military pic.twitter.com/Ngo5GQZOko

The Mexican government confirmed the arrest of Ovidio Guzmán.

Statement from Mexican government confirms arrest of Ovidio Guzmán, captured by Mexican military at a house in Culiacán.

No mention of Iván Archivaldo…https://t.co/yQ24eq5aUK

However, the battles may not be over because Daily Wire reporter Ryan Saavedra is reporting that the “family members of military personnel are being warned that truckloads of cartel gunmen are hunting for the relatives of Mexican army personnel in retaliation for the capture of El Chapo’s son, Ovidio Guzman, in Culiacan, Sinaloa.”

SCOOP: Source tells me that family members of military personnel are being warned that truckloads of cartel gunmen are hunting for the relatives of Mexican army personnel in retaliation for the capture of El Chapo's son, Ovidio Guzman, in Culiacan, Sinaloa

Ovidio Guzmán is one of four children from El Chapo’s second marriage. Ovidio is named on a February 2019 cocaine trafficking indictment by the U.S. Department of Justice.

Ovidio is said to be one of the top leaders of the Sinaloa Cartel after their father was captured and extradited to the United States in 2017. Joaquin Guzman was sentenced to life in prison on drug trafficking and conspiracy charges.