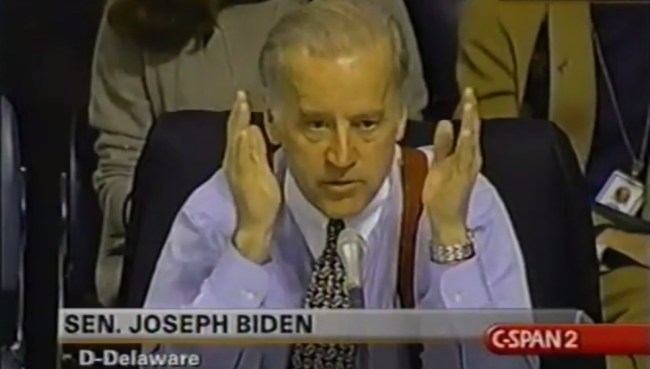 There are 24 hopefuls competing against one another to be the Democrat party’s presidential candidate. It will be a hard-fought battle to whittle the field down to one candidate who the Democrats believe can beat President Donald Trump in the 2020 election.

But in order to select the best candidate to challenge the incumbent President, the Democratic candidate must sling a little mud against each other — which includes unearthing detrimental and embarrassing political gaffes or ideologies. One blast from the past resurfaced last week and the old video shows that Joe Biden hates raves.

The 76-year-old Joe Biden has been in politics for nearly 50 years and that can be a double-edged sword, on one hand, he has decades of political experience, but on the other hand, he has more time to make mistakes that can be highlighted. It also hurts Biden that politics and culture have seemingly changed at warp speed in recent years thanks to the 24-hour news cycle and social media. What may have been ultra progressive 10 years ago, might seem super conservative by today’s standards.

An old clip of former Vice President Joe Biden talking about putting people in jail for organizing a rave has gone viral. Footage from 2001, shows then-Delaware Senator Joe Biden giving his opinions on raves at a hearing hosted by the Senate Caucus on International Narcotics Control. The tweet has been viewed over 700,000 times and is captioned: “Wow Joe Biden really doesn’t like EDM.”

“I would be passing new ordinances relating to stiff criminal penalties for anyone who held a rave — the promoter, the guy who owned the building. I’d put the son-of-a-gun in jail,” Biden says in the C-SPAN video.

“I would change the law. I would be moving vigorously… There is no doubt about where these raves are – in the middle of the desert. Arrest the promoter. Find a rationale, unrelated to drugs,” Biden says about using any charges, even ones that are not drug-related, to make arrests on people involved with raves. It seems that 2001 Biden would like to ban Burning Man and Coachella.

“If you are able to, theoretically, eliminate the circumstances and the places under which raves take place… in addition to policing those, which on their face, are legitimate, you would cut into this in an incredible way,” Biden said at the Senate hearing.

“For example, I’m the guy who authored the crack house legislation. We can use the crack house legislation to tear down these buildings,” Biden said. The former VP references “the crack-house law,” which allowed the government to deliver harsh penalties to individuals who “knowingly open, lease, rent, use, or maintain any place for the purpose of manufacturing, distributing, or using any controlled substance.”

But this wasn’t just grandstanding by Biden, he was so serious about ridding the world of raves that he introduced the Reducing Americans’ Vulnerability to Ecstasy Act or RAVE Act in 2002. This act proposed a serious crackdown on the drug ecstasy, often found at raves.

The RAVE Act was not passed, but it was the model for The Illicit Drug Anti-Proliferation Act, which was passed on April 10, 2003. The act stated that club owners and party promoters could be held criminally liable if any drugs were sold or consumed at an event that they promoted or hosted. Even street team volunteers who passed out flyers promoting the events could be liable. Penalties for promoters or club owners included fines of up to $250,000 and up to 20 years in jail.

Biden, who is currently the Democratic front-runner of the 24 candidates, also co-wrote the Anti-Drug Abuse Act of 1986. The law mandated a minimum sentence of five years without parole for possession of five grams of crack cocaine, but you would need 500 grams of powder cocaine to get the same prison sentence. Many critics of the law, including the ACLU, concluded that it was racially motivated and unfairly targeted Black communities.

It should be noted that despite Biden’s hard stance against drugs, his own children have reportedly been involved in illegal drugs. Biden’s daughter Ashley was arrested for marijuana at the age of 17. There was no conviction recorded for the 1999 incident.

Joe’s son, Hunter Biden, allegedly had a checkered past with illegal drugs, but has never gone to jail. In 2012, Hunter was reportedly discharged from the Navy Reserve after testing positive for cocaine, according to the Wall Street Journal.

There were reports of drugs found in a rental car allegedly used by Hunter Biden. A Hertz employee at the Prescott, Arizona location reportedly informed police about the strange items that were left in the rental vehicle. According to a police report from 2016, cops found a U.S. Secret Service business card, two D.C. driver’s licenses, multiple credit cards, and a Delaware Attorney General badge, all belonging to Biden.

Police also discovered “a small white and brown pipe approximately 3-4 inches long,” and “a small ziplock bag with a white powdery substance inside all sitting on the passenger seat” in a rental car. The car keys were also put in the gas tank compartment instead of the overnight drop box.

During Hunter’s divorce to his wife Kathleen Buhle, she stated in court that Biden used drugs.

“Throughout the parties’ separation Mr. Biden has created financial concerns for the family by spending extravagantly on his own interests (including drugs, alcohol, prostitutes, strip clubs, and gifts for women with whom he has sexual relations), while leaving the family with no funds to pay legitimate bills,” Hunter’s ex-wife Kathleen said of Biden in the 2017 divorce filing according to Page Six.

Maybe politicians should focus on real problems and not raves. Also, those in crack houses should not throw the first crack rock.