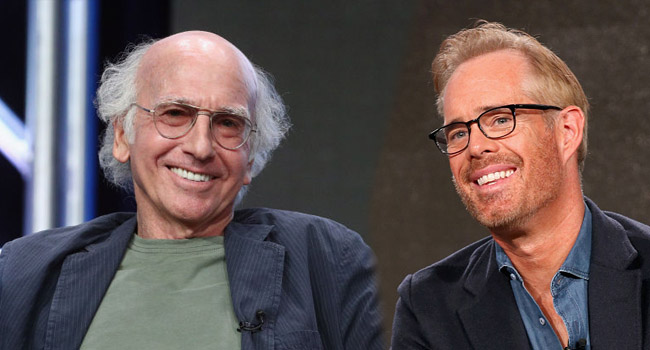 Fox broadcaster Joe Buck attended Erin Andrews’ wedding to Jarret Stoll back in June. Naturally, (because why wouldn’t you?) he was hanging out with none other than Larry David.

Somehow the topic came up during Buck’s appearance on The Howard Stern Show on Tuesday and and the story Buck tells about that day is exactly how you’d expect Larry David to behave.

“So, Erin got married at this place called the Yellowstone Club on this mountain top. It was gorgeous, but it was sunny. Larry’s in the row behind me and he’s like, ‘I thought if i wore a hat I’d look like a jerk and now I’m dying of skin cancer it’s so sunny and I don’t have any sunblock, I left the hat in the room and I’m waiting for the [Curb Your Enthusiasm theme song].

“And then we go to the reception afterward and it got cold, it was like 50, and now he’s shivering and they’re bring him blankets and putting candles in front of him like it’s a small fire that he’s gonna get warm from. It was awesome. He’s such a great guy.”

David also was having no part of the dancing people were doing, but was more than happy to watch when Buck asked him, “Are you, Larry David, going to only watch me dance?” To which David replied, “Absolutely. Just know that when your wife drags your ass out there, I will only be watching you dance.”

Listen to Buck tell the entire hysterical story below…

On the plus side, at least Buck didn’t have to work with him…