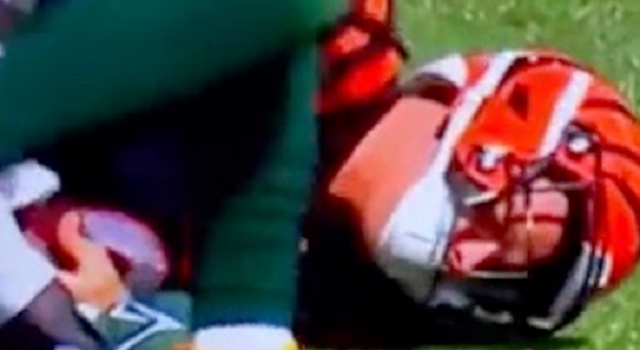 Joe Burrow tore his ACL last season but it appears that he’s not afraid to make risky plays.

In the second quarter of the Bengals-Packers game, Burrow took off running and took a vicious hit to the legs that sent him airborne.

welp, Joe Burrow was just in a car crash pic.twitter.com/WiXChKidxa

— Christian D'Andrea probably does not own a brewery (@TrainIsland) October 10, 2021

Burrow was briefly attended to by the medical staff evaluated him for a potential concussion and was back on the bench minutes later but fans freaked out a bit watching the young QB take a vicious hit to the legs.

Update: Burrow came back in the game and threw a 70 yard TD.

Joe Burrow comes back in and throws a 70-yard TD to Ja’Marr Chase!

Bengals vs. Packers is an awesome game right now. pic.twitter.com/HMMF5Hoz0a

I hope Joe Burrow is okay, but he gotta learn to stop doing this. For his sake, and his teams sake. Slide and play another day bro! #Bengals pic.twitter.com/JbYuVGmODw

Burrow needs to protect himself. Guy is a psycho in the best way, but damn. Hate seeing that.

Joe Burrow's gotta do a better job of keeping himself out of harm's way on that one. Understand he's a competitor, but that wasn't smart.

Lucky to avoid injury there – being evaluated for concussion after he hit his head on ground https://t.co/efUdLeHwkH