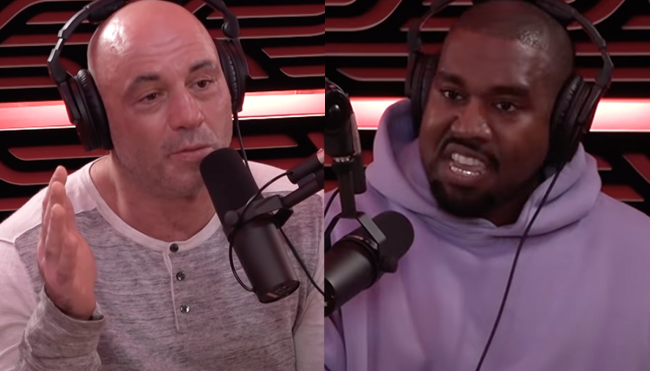 If you don’t have three hours to devote to the conversation, you can also watch this minute-long video that does a pretty good job summing up its general essence.

By this point, it’s hard to be genuinely shocked by anything Kanye does (with the notable exception of actually releasing an album on the day it’s supposed to drop), so while a story the host shared on a recent episode of The Joe Rogan Experience may have been surprising if it had been about any other guest, it’s par for the course when as far as West is concerned.

During his chat with comedian Ms. Pat, Rogan recalled what went down prior to Kanye’s appearance on the show and revealed West floated an incredibly casual suggestion: redesigning the entire podcast studio before he stopped by.

Here’s what went down (the anecdote kicks off around the 3:45 mark in the video):

“Before he came on, there was a point in time where he wanted to redesign my studio. He’s like, I want to redesign a studio, I want to do it somewhere else. I was like, ‘OK…’

All of a sudden, we’re on Facetime and he starts showing me sketches he already has of the new studio that he wants to design. He was making a studio like a womb! This big crazy studio, he had wild ideas. His brain, it’s like he’s on jet fuel, just constantly going.”

It’s unclear if Rogan incorporated any of West’s suggestions when he was revamping the studio he constructed in Austin after fleeing California, but based on the notable lack of architectural nods to the female reproductive system, I’m going to go out on a limb and guess they were largely ignored.