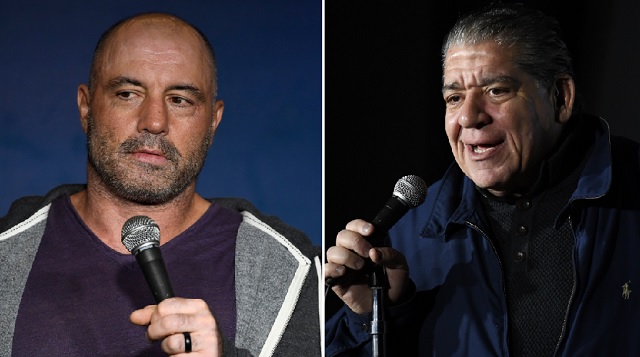 The Joe Rogan era over at Spotify is off to a rocky start and Joey Diaz is having a good laugh at his friend’s expense.

Two weeks ago Rogan apologized on Instagram for spreading a debunked conspiracy theory that Portland wildfires were intentionally ignited by “left-wing” activists.

“I fucked up on the podcast with Douglas Murray and said that people got arrested lighting fires in Portland,” “That turns out to not be true. I was very irresponsible not looking into it before I repeated it.”

It was later reported that Spotify employees threatened to strike if they didn’t get editorial oversight over the JRE Podcast after Rogan had controversial writer Abigail Shrier on as a guest.

During a recent interview, Joey Diaz went a crude rant where he mocked Rogan for having to apologize after taking the $100 million Spotify deal.

Things were good in the basement dog, once you take that Spotify money, you gotta start apologizing and making believe he cares about tr*nnies, now he has got to go to a tr*nny parade…That’s what happens when you get that money, when you cash that big check you gotta watch what you say…Did you see him? He’s gotta do the apology, My name is Joe Rogan, I can’t go kill deer no more, he can’t do nothing no more, 100 million.