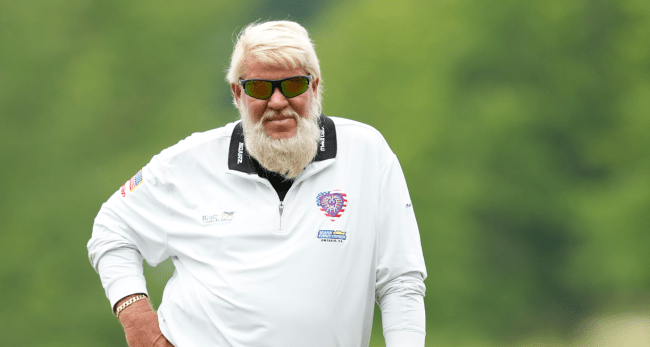 Golf legend John Daly burst on to the scene like a bolt of lightning, winning a Major just four years into his professional career.

Daly’s victory in the 1991 PGA Championship combined with his physique, attitude and ability to obliterate the golf ball quickly made him a fan favorite.

Unfortunately, Daly would win only one more Major in his illustrious career, the 1995 British Open, and only five PGA Tour tournaments overall.

Still a fan favorite, he was interviewed last week on Tomi Lahren is Fearless and shared his takes on the new LIV Tour and what it would have taken for him to have won more events on the PGA Tour back in his prime.

Daly, who has won golf tournaments on the PGA Tour, European Tour, Asian Tour, Sunshine Tour, and Champions Tour, when asked by Lahren about the LIV Tour joked, “Honestly, I’ve just been staying out of it. I’m too old to even worry about it. They’re not going to call me.”

He then said that he believed that “some guys should do it [play on the LIV Tour]” and he’s not against it, but he’s also not against the PGA Tour.

However, Daly added, “It’s supposed to be the [PGA] Tour works for us, but I’m mind of leaning, like, maybe Jay [Monahan, PGA Tour commissioner] thinks we’re working for him, and I don’t want to make him mad or anything, but I just wish they would come together and just do it together.

“I’ve known Greg [Norman] for a long time. His idea was the World Golf Championship and him and out last commissioner Tim Vincent, they worked it out.”

In another part of the interview, a clip was shown of Daly hitting a golf ball that was teed up in his friend Steve Ford’s mouth while he was lying down in a parking lot.

“We were drunk as skunks,” Daly told Lahren about the video. “That was like two or three o’clock in the morning.

“If the PGA Tour let me play drunk, I’d win a lot more tournaments. And barefooted. If I could play the Tour barefooted, it’d be nice.”