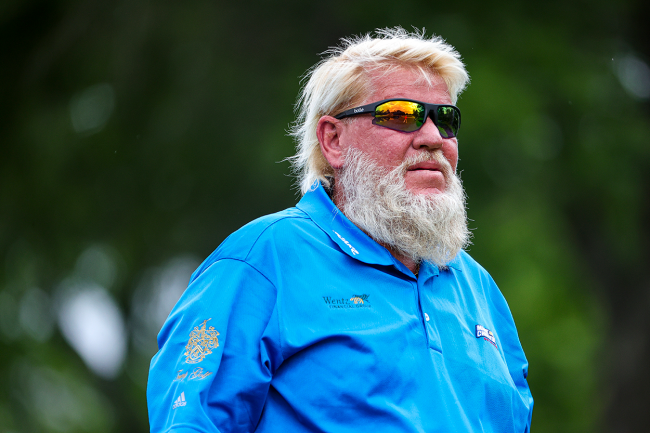 John Daly is a living legend. The 56-year-old golfer is not only one of the best to ever do it, but he does it all while truly living life without fear.

Over the course of the past few months alone, he played in The Masters and the PGA Championship, crushed beers and performed with Hootie and the Blowfish, hit the casino and Hooters during the tournament weekend, and ripped plenty of cigarettes. Over the course of Daly’s career, the countless stories about the amount of diet cokes he drank while competing and the parties he attended back in the day precede him.

At some point over this past weekend, the 5-foot-11, 250-pound Daly put on a belly flop clinic and did so in style. A video that has recently gone viral across the internet shows the Arkansas-native at a lake completely shirtless.

An unknown man opens the video by flailing his way into the water while attempting a belly flop. Daly wasn’t having it.

“That’s not a belly flop,” he says before climbing atop a rickety wooden bench.

The person filming the video proceeds to say “you be careful” in the background, but Daly was not. After reaching the top of the bench, he proceeds to go full-send into the lake below with the most perfect belly flop form.

As Daly emerges from the water, he proceeds to let the man who went before him know what’s up.

Meanwhile, the man who did not do a proper belly flop rubs his stomach, as if the impact with the water hurt. Daly doesn’t even touch his stomach. No pain for the legend.

Daly’s form was perfect. His arms and legs were fully stretched wide and his form hardly collapsed when he hit the water. It was textbook. Incredible.