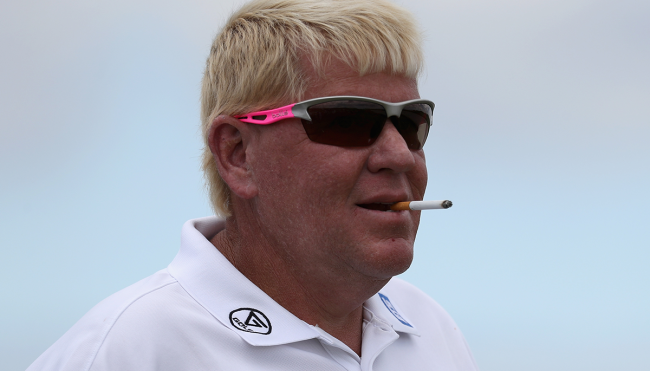 John Daly hasn’t been a participant in the Masters in over 15 years.

The legendary golfer’s last appearance at Agusta National was way back in 2006. He, again, was left off the invite list for the 2022 event, but he hasn’t let that stop him from having a good time.

Daly has made a tradition of bringing his RV to the Agusta Hooters for the greatest week in golf. This year was no different.

Daly made his annual stop at the restaurant to drink some beer, enjoy the food, sign autographs, and sell some of his John Daly merchandise.

He took a number of pictures with Hooters waitresses, which were then broadcast on different avenues of social media.

The Masters ended Sunday with Scottie Scheffler taking home the Green Jacket, but Daly’s fun was far from over.

John Daly Jams On Stage With Hootie & The Blowfish

After the event wrapped up, Daly made the short trip to Myrtle Beach to show off some of his musical talents. He hopped on stage with Darius Rucker and the rest of the Hootie & the Blowfish crew as they jammed at the annual Monday After the Masters concert.

And I have to say, Daly’s not too bad.

Here he is playing Bob Dylan’s Knockin’ on Heaven’s Door alongside the band.

A post shared by Monday After the Masters (@monaftermasters)

Daly might not be playing too much golf these days, but he certainly still knows how to have a good time.