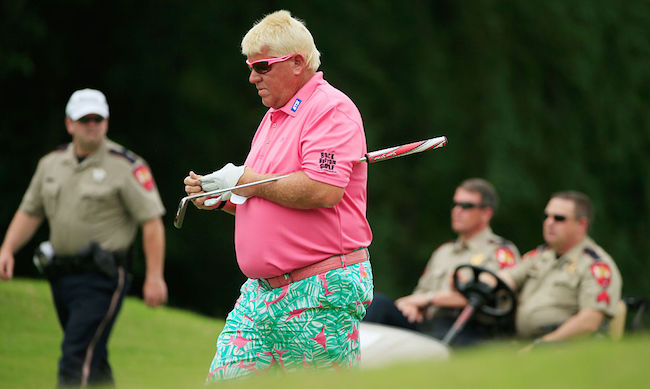 This week, tens of thousands of people will make the pilgrimage to Augusta National Golf Club for the 2018 Masters Tournament, which you can watch online starting on Thursday if you didn’t want to risk getting screwed buying tickets from scalpers. One of those people is John Daly, who has made a tradition of bringing an RV down to Georgia every April for the past few years, where he sells swag, signs autographs, and smokes cigs exactly where you’d expect him to: the parking lot of a Hooters.

It’s been over a decade since Daly played in the tournament, but that hasn’t stopped him from making an annual trip to Georgia (he arrived a few days ago). If Jim Nantz is to be believed, The Masters is a tradition unlike any other, but I’m assuming he’s given it this title because he isn’t aware that John Daly has started posting up in the place where people who say they read Playboy for the articles go when they want delicious wings.

A number of fans have already flocked to the parking lot for a chance to meet the man who may be the closest golf will ever get to having its own Happy Gilmore, and it might be worth a visit if you’re in the area.

This one is just to prove the picture of the truck is genuine @Adeleman63. What a gent @PGA_JohnDaly is, signed merchandise, and posed for photo with little ol me. pic.twitter.com/uS9W6wVdWP

The price of concessions at The Masters might be famously reasonable compared to basically every other sporting event in existence (the Atlanta Falcons notwithstanding), but when you consider the price of admission, I can definitely see the appeal in living outside of a Hooters for a few a week and popping in to catch a few rounds.