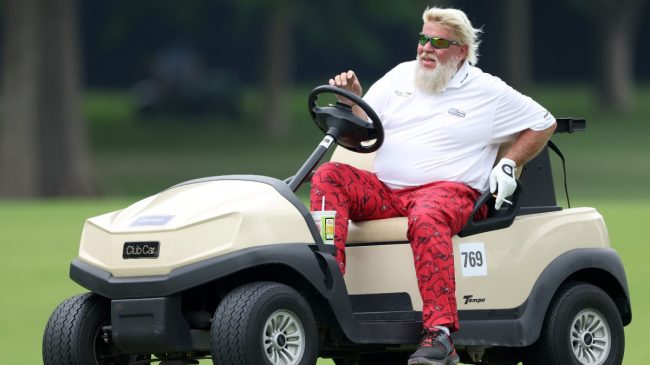 John Daly is living his best life at this week’s PGA Championship in Tulsa, Oklahoma.

While the golfer missed the cut by shooting +8 over the first few days of the tournament, he’s not letting it keep him down. Daly is well-known for his on-course antics, most of which involve a diet Coke and a smoke.

He made a few off-course appearances this week, too, one of which came at a local casino. Daly was spotted throwing some money around on the slot machines. And of course, his trip wouldn’t be complete without one of his infamous stops at Hooter’s.

With his missing the cut, Daly’s Sunday is now wide open. He took some time this morning to join ESPN’s PGA coverage with Joe Buck and Michael Collins, and the appearance is so on brand it hurts.

John Daly is starting off his Sunday morning by joining the Joe Buck-cast while ripping heaters in his RV parked in a Tulsa church parking lot. pic.twitter.com/rxxL7HtCIL

In the least surprising news of the day, Daly called in from a church parking lot looking like he was fresh off of a bender. Making the appearance even better, a lit cigarette was hanging from the golfer’s lip as he fogged his RV with a cloud of smoke.

.@ESPNCaddie: "What was going through your head Saturday night leading the PGA?"

John Daly: "I probably went to Hooters and had 3 pitchers of beer. Hell, I didn't care." pic.twitter.com/kUr5ihRBKR

The +8 wasn’t his best performance as a pro golfer, but it hasn’t changed how he goes about his business. Daly might’ve missed the cut but it’s not stopping him from living his best life.