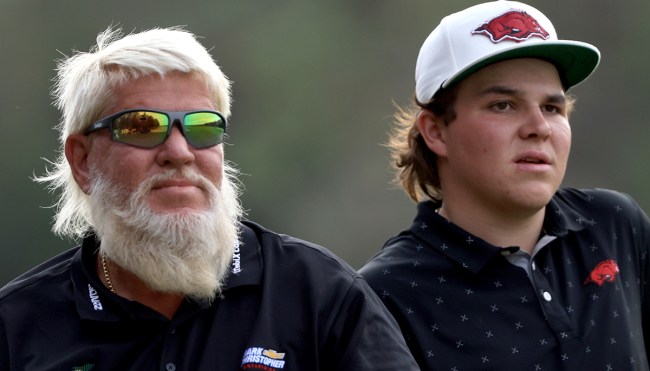 On Monday, J.R. Smith became the first former professional athlete to land an NIL deal after the man who joined the golf team at North Carolina A&T State University after his NBA career came to an end inked a contract with Lululemon.

Now, you’d think that would be the most significant development to come out of the college golf endorsement realm this week (or, when you consider J.R. Smith is probably the only NCAA golf team member 99.99% of people could name, this year).

However, in a fairly surprising twist, it actually took less than a day for him to get upstaged.

If you’re familiar with the man, the myth, and the legend who is John Daly, then you’re likely aware the beloved golfer is a big Hooters guy; Jim Nantz might want you to believe The Masters are a tradition unlike any other, but I’d argue Daily posting up in the parking lot at the chain’s Augusta location during the tournament each year blows it out of the water.

You may not, however, be aware that the golfer has a son who plays college golf. John Daly II is a freshman at Arkansas who currently competes for the Razorbacks, and on Tuesday, he officially added “Hooters Ambassador” to his résumé after announcing he’d sign an NIL deal with the wing chain.

The younger Daly will reportedly be teaming up with his dad to help promote the brand, and it’s hard to think of a more natural pairing than this one.