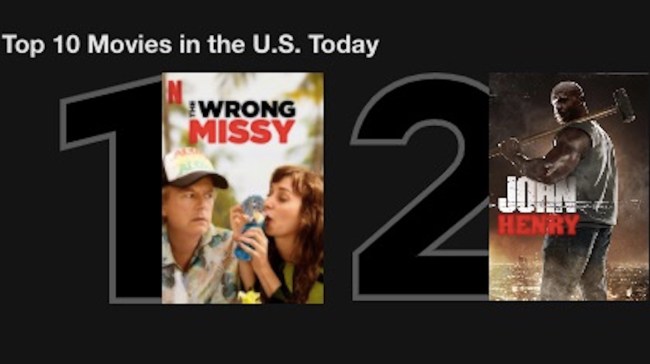 Despite having made a living on the internet for the last five years or so, it still makes absolutely no sense to me. The way things trend, how things go viral, what people seem to like and dislike: all a complete mystery to me. That’s why I just stick to writing about what I know and hope that you all just come along for the ride with me.

Take this Netflix original movie John Henry, for example, which currently has a 0% Rotten Tomatoes score. Now, does it surprise you that a cheap B-movie starring Terry Crews and *checks notes * Christopher ‘Ludacris’ Bridges is getting no semblance of love from snooty film critics? Of course not. What’s shocking is that it’s currently the second most-watched movie on Netflix in the United States right now, just behind the equally awful-looking David Space movie The Wrong Missy.

To be quite honest, I didn’t even know Ludacris was allowed to act in movies outside of the Fast and Furious franchise. I guess I just assumed that Vin Diesel always kept him tucked away at a Universal Pictures studio with the rest of the series’ various props. “Oh, another Fast and Furious movie is coming up, better go dust off the ole Ludacris robot.”

I suppose that’s the brilliance of Netflix, though: now that people are aware that John Henry simultaneously awful and popular — a.k.a. the prestigious “so bad it’s good” — then dumbasses like myself will almost certainly spend some of their precious time of this Earth checking it out. Fair play, Lord Netflix.

We got to stop trusting Netflix Top 10 in the US Today list because they got a movie up called John Henry starring Terry Crews & Ludacris, which is ranked #2 and is possibly the WORST movie I’ve ever seen.

This is by far the worst movie of 2020 😂😂 do not watch this shit! I’m saving you 90 minutes of your life.. #JohnHenry #netflix pic.twitter.com/Gmf5Kho2Jb

I need yall to stop what you doing and go watch that John Henry shit on Netflix right now!! Its probably the worst movie i ever seen but I need yall time wasted like mine was

I want y’all to watch John Henry on Netflix starring Terry Crews and Ludacris cuz it’s the worst shit I ever seen in my life. I’m not exaggerating dog, just look at Luda. pic.twitter.com/H6DppQU4nY

I have a ton of questions about what I just watched. #JohnHenry pic.twitter.com/Bn4M9MGgjV

🗣Just for that movie Netflix I’m Cancelling my subscription #JohnHenry

I watched #JohnHenry today and they seriously had ya mans @Ludacris rockin' a gold jawbone with infinity stones in it. 😳😂 pic.twitter.com/DIYpoO0hwT

Me going back to 9pm on May 11, 2020 to stop myself from watching John Henry pic.twitter.com/d1O7EdpvC5

John Henry movie is the worst movie on Netflix. #JohnHenry