John Krasinski Tells Story How He Nearly Quit Acting Until His Mom’s Advice, Fights Colbert On ‘The Late Show’ 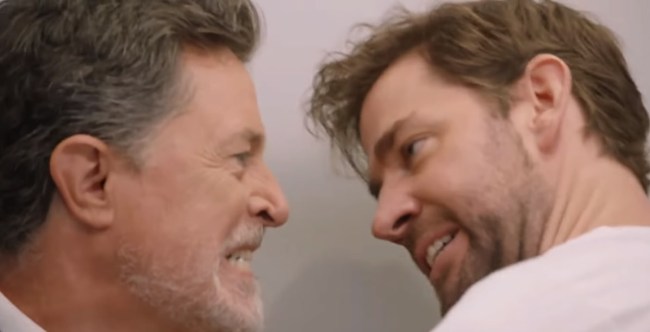 Via The Late Show with Stephen Colbert

Before John Krasinski was a big action star in Tom Clancy’s Jack Ryan and even before he was Jim Halpert in The Office, John Krasinski was the very definition of “struggling actor.” However, he was able to achieve Hollywood stardom thanks to important career advice that he received from his mom.

On Tuesday night, Krasinski was on The Late Show with Stephen Colbert where he explained how his mother was the one person who believed in his dreams and urged him to fight for them.

He was going to college to be an English teacher, but he later went to a theater school that completely changed his life. He then moved to New York City to be an actor. But before he left for his big adventure, his mother gave him some advice.

“If you don’t have a nibble or a bite in two and a half or three years, you have to make me one promise, you have to pull yourself out, because as your mother you can’t ask me to tell you to give up on your dream,” Krasinski’s mother told him.

Krasinki’s acting career started in 2000 with an uncredited role as “judge’s assistant” in the movie State and Main that starred Philip Seymour Hoffman, William H. Macy, and Julia Styles. John did not appear in another movie until 2002 with Alma Mater with the critical role as “Flea Club candidate 1.”

To supplement his periodic work as an actor Krasinski was a waiter, which he was not a huge fan of. He was struggling to find consistent work and promising roles after a few years and was about to quit his dreams of becoming an actor.

He called his mom and asked her to pick him up from New York City. That’s when his mother gave him some more excellent advice.

“Just wait it out, wait until the end of the year,” she said.

“Three weeks later I got The Office,” he said.

After playing the quirky and funny Jim Halpert for eight years, Krasinki branched out to more dramatic roles such as 13 Hours, A Quiet Place, and Tom Clancy’s Jack Ryan. He was able to not be typecast as only a funny guy and is now somewhat of an action hero.

However, Stephen Colbert isn’t buying it. The late-night talk show host still believes that Krasinski is a comedic actor and not an action star and will even fight the actor to prove his point.

Colbert insults Krasinki so much that it sparks a fight between the two. The action fight scene sees the two men trade barbs and punches from the stage, to backstage, to the elevator, to the roof of the Ed Sullivan Theater.

What if Jim Halpert was Jack Ryan? Funny or Die imagined the mash-up TV show with Tom Clancy’s Jim Ryan.

Let’s remember the “Best of Jim Halpert” from The Office.