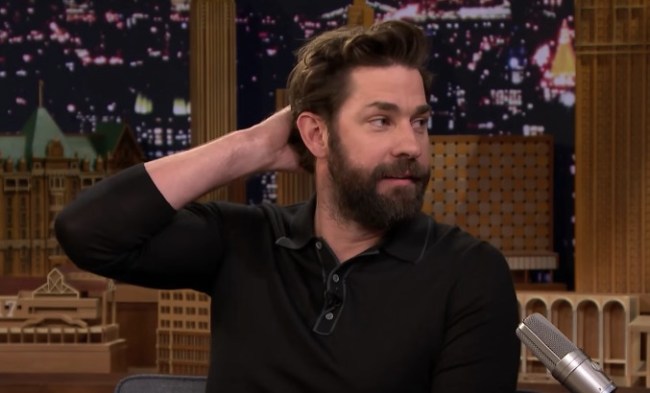 John Krasinski and his wife Emily Blunt are officially NYC residents but this isn’t the first time John’s lived in New York. He’s been a permanent resident in Los Angeles for years but prior to that, he was an intern (and working actor) at 30 Rock in New York.

As a guest on The Tonight Show Starring Jimmy Fallon last night, John Krasinski reminisced about the time that he was wearing his Red Sox jersey in midtown near 30 Rockefeller Plaza when out of nowhere he got hit in the head with something. It was that ‘welcome to New York’ moment that everyone experiences whether they were born in the city or moved there as a transplant. John’s entire interview is actually pretty spectacular because after the Red Sox story he discusses a London Customs agent getting all livid with him about marrying Emily Blunt:

My ‘welcome to New York’ moment was a pretty common one. I made the mistake of getting into an empty subway cart during crowded commuter hours because I didn’t know any better. What I found was a drunken disheveled homeless person whose face was blood from falling down in his own excrement on the subway cart floor. In comparison, I’d happily take a bagel thrown at my head over what I was forced to smell in that subway car.

Years later, I was attacked by a cab driver who tried to choke me because I was talking on my cellphone in the backseat and he mistakenly thought he’d heard some sort of racial epithet when in reality I was talking to my mother on the phone and the guy barely spoke English so I don’t have a fucking clue what he thought he heard but it was probably something like ‘when should I fly home for Thanksgiving?‘….There was also the homeless lady on the Upper East Side who would walk around and try to spit on people. I know this because she spit on my friend Logan and it landed in her mouth.

I miss New York. This stuff would happen on the regular. You don’t find yourself caught up in batshit crazy situations every week in other cities. It really keeps you on your toes.