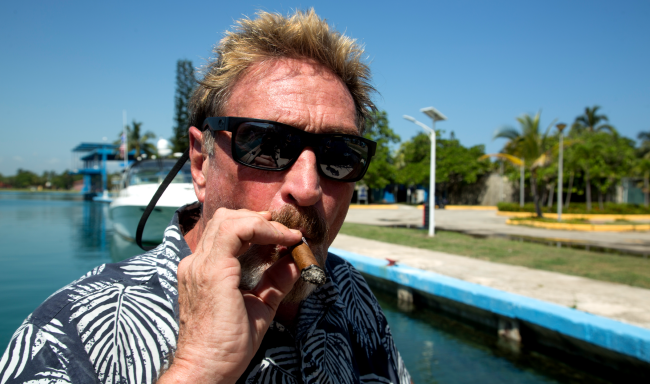 On June 23, shortly after have been approved for extradition back to the United States on charges of tax-evasion and fraud, John McAfee was found dead in a Spanish jail. Authorities in Spain claimed the infamous antivirus software entrepreneur had died as a result of suicide by hanging.

Immediately following his suspicious death, McAfee’s wife Janice claimed on social media that the United States wanted her husband to “die in prison.”

“John’s honesty has often gotten him in trouble with corrupt governments and corrupt government officials because of his outspoken nature and his refusal to be extorted, intimidated or silenced,” Janice wrote.

“Now the US authorities are determined to have John die in prison to make an example of him for speaking out against the corruption within their government agencies,” she added.

This week, McAfee’s wife Janice once again made claims of a conspiracy against her husband by posting what is alleged to have been his suicide note – a note she believes is fake.

“Here is the alleged suicide note found in John’s pocket. This note does not sound anything like someone who has no hope and is contemplating ending their life. This note sounds like one of John’s tweets,” Janice tweeted.

Among the many scribbles on the note a few sentences could be read, including, “I am a phantom parasite” and “I want to control my future, which does not exist.”

Here is the alleged suicide note found in John’s pocket. This note does not sound anything like someone who has no hope and is contemplating ending their life. This note sounds like one of John's tweets. #NotASuicideNote #JusticeForJohnMcAfee pic.twitter.com/QCODfvh8sh

Janice McAfee followed that tweet up with another one questioning the note’s authenticity.

“The handwriting is suspect & I doubt the authenticity of the note. It reads more like someone trying to imitate John’s style of tweeting. And if this note was found in his pocket where are the markings of the note being folded into his pocket?” Janice tweeted.

The handwriting is suspect & I doubt the authenticity of the note. It reads more like someone trying to imitate John’s style of tweeting. And if this note was found in his pocket where are the markings of the note being folded into his pocket? #NotASuicideNote #JustForJohnMcAfee

Prior to the release of John McAfee’s alleged suicide note, Janice had also expressed dissatisfaction with how Spanish authorities were handling the circumstances surrounding his death.

“Some have asked if I have been able to see John’s body,” Janice tweeted. “Well the answer to this is yes and no. I was able to view John’s head through a window at the facility where they are keeping him. His entire body from the neck down was covered with a sheet & blanket.”

Janice also wrote on Twitter, “There has been no sense of urgency from the various Spanish authorities involved in investigation into John’s death and there is clearly a cover up happening here concerning the events surrounding his death.”

How John McAfee ended up in this situation is the stuff of movies – one that apparently will star Zac Efron as the late tech mogul.

1961: McAfee’s alcoholic and abusive father kills himself with a gun.

1967: McAfee graduates with a degree in mathematics from Roanoke College in Virginia. He goes on to begin work towards a doctorate in mathematics degree at Northeast Louisiana State College but is expelled over a sexual relationship with a female undergraduate student who later went on to become his first wife (and very little about whom is known).

1968: McAfee gains employment as a programmer at NASA’s Institute for Space Studies in New York City.

1983: McAfee, now working at Omex, is forced to resign due to his severe alcohol and drug addictions.

1986: While employed by Lockheed, McAfee learned about Brain, the first computer virus for the PC. This led him to create his first antivirus software.

1993: McAfee steps down as chief executive of McAfee Associates Inc.

1994: McAfee sells his last remaining stake in the company.

2009: The New York Times reports McAfee’s $100 million fortune had dwindled down to just $4 million due to failed investments.

2012: McAfee’s property in Orange Walk Town, Belize, is raided by the Gang Suppression Unit of the Belize Police Department. When police arrived, McAfee was found in bed with a 16-year-old girl. He was arrested for unlicensed drug manufacturing and possession of an unlicensed weapon, but was released without being officially charged.

2012: McAfee is a person of interest in relation to the murder of American expatriate Gregory Viant Faull, a neighbor of McAfee’s in Belize who had complained to authorities about McAfee’s lifestyle and noise crowds created at his home.

2012: McAfee flees Belize and is later discovered at a resort in Guatemala. He was shortly thereafter arrested for illegally entering the country. McAfee fakes two heart attacks in prison to avoid deportation to Belize. He was eventually released and deported back to the United States.

2013: McAfee uploads a video to YouTube criticizing McAfee Antivirus while snorting cocaine and being stripped of his clothes by a group of women.

2014: At the DEF CON conference in Las Vegas, McAfee warns against the use of smartphones due to apps being used to spy on consumers who do not read privacy user agreements.

2014: McAfee claims the Belizean government raided his property and seized his assets, with the house later being burned down.

2015: McAfee announces he will run for President of the United States under the newly-formed Cyber Party. He later switches to the Libertarian Party and attempts to run again in 2020.

2015: McAfee is arrested in Tennessee on for DUI and possession of a firearm while intoxicated.

2016: McAfee is appointed chairman and CEO of MGT Capital Investments, a company he refocused from social gaming to cybersecurity and claimed “anti-virus software is dead, it no longer works.”

2017: McAfee drives MGT into the mining of bitcoin and other cryptocurrencies.

2018: McAfee resigns from MGT to devote all of his time on cryptocurrencies.

2018: The Circuit Court in Orlando, Florida, refuses to dismiss a wrongful death lawsuit against McAfee in relation to the death of Gregory Viant Faull.

2019: McAfee announces he is on the run and living internationally on a boat in the face of coming tax evasion charges.

2019: McAfee, while visiting on his yacht, is arrested in Puerto Plata, Dominican Republic, on suspicion of carrying high-caliber weapons and ammunition. He was held for four days before being released.

2020: McAfee falsely claims to have been arrested in Norway during the COVID-19 pandemic for not wearing a proper face mask.

2020: McAfee is arrested in Spain for tax evasion charges brought forth by the United States Department of Justice.

2020: McAfee is indicted on charges leveled by the U.S. Securities and Exchange Commission over a fraudulent cryptocurrency pump and dump scheme which resulted in investors losing over $13 million.

2021: McAfee is found dead in his prison cell at the Brians 2 Penitentiary Center near Barcelona.