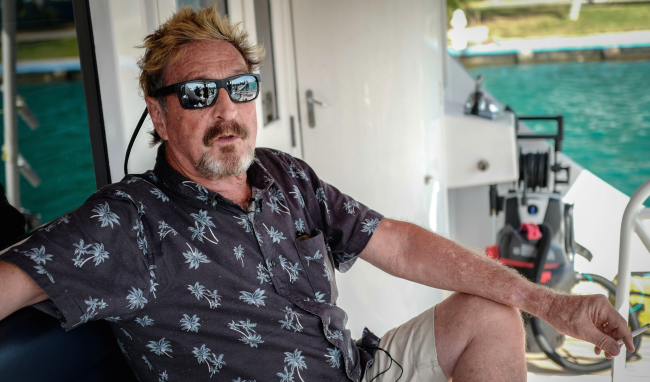 John McAfee, who made his fortune creating and selling antivirus software, was found dead in what authorities said was suicide while in a Spanish jail on Wednesday afternoon.

McAfee reportedly was found hanged in his jail cell as he was awaiting extradition to the United States for tax-evasion and other financial charges.

Spain’s highest court had approved McAfee’s extradition to the United States on Wednesday. reported the Guardian.

“The court agrees to grant the extradition of John David McAfee as requested by the American judicial authorities for the crimes referred to in the tax offense indictments for years 2016 to 2018,” read the ruling.

On Sunday, in a Father’s Day post on social media, McAfee’s wife Janice, who he met while she was working as a prostitute, claimed that the United States wanted her husband to “die in prison.”

“John’s honesty has often gotten him in trouble with corrupt governments and corrupt government officials because of his outspoken nature and his refusal to be extorted, intimidated or silenced,” Janice wrote.

“Now the US authorities are determined to have John die in prison to make an example of him for speaking out against the corruption within their government agencies,” she added.

Happy Father's Day @officialmcafee. Though you are spending the day in prison know that you are loved and appreciated. #FreeJohnMcAfee #FreeMcAfee pic.twitter.com/YFmB36KWfb

“The media continues to vilify him, per their narrative, and there is no hope of him ever having a fair trial in America because there is no longer any justice in America.

“You either play ball or get f—ed. Those are literally the only options now. Before you were innocent until proven guilty but somehow that has changed to guilty until proven innocent.

“Now anyone can level the most heinous accusations against you without any proof and having no basis in reality but in the court of public opinion, you are tried, convicted, found guilty and your life irreparably destroyed, all before having your day in court.

“These eight months John has spent in prison in Spain have been especially hard on his overall health both mentally and physically, as well as financially, but he is undeterred from continuing to speak truth to power.”

The US believes I have hidden crypto. I wish I did but it has dissolved through the many hands of Team McAfee (your belief is not required), and my remaining assets are all seized. My friends evaporated through fear of association.

Yet, I regret nothing.

McAfee, 75, was being held in the Brians 2 prison near Barcelona after being arrested there on tax charges related to an alleged cryptocurrency scam filed by Tennessee prosecutors in October 2020.

The tech mogul was also linked to a 2012 murder of one of his neighbor’s in Belize, but he was never charged and the case has yet to be solved.

After fleeing the country, McAfee was found guilty in a wrongful death lawsuit filed by the dead neighbor’s family and ordered to pay more than $25 million.