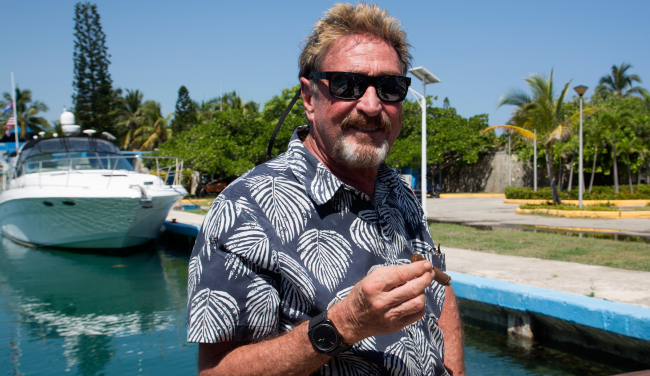 John McAfee, the wealthy antivirus software entrepreneur, was reported to have hanged himself in a Spanish jail on Wednesday. He had just been approved for extradition back to the United States on charges of tax-evasion and fraud.

Back in October of 2020, McAfee wrote in a tweet, “Know that if I hang myself, a la Epstein, it will be no fault of mine.”

Today a man facing a difficult situation asked if I knew of painless ways to kill himself. Having little experience in such, I was of not much help.

The amazing thing is that the tone of the discussion was like discussing the weather.

Prison is a strange environment.

“Judicial staff have been dispatched to the prison and are investigating the causes of death,” the Catalan Department of Justice said in a statement. “Everything points to death by suicide.”

McAfee’s lawyer, Javier Villalba, told Reuters, “This is the result of a cruel system that had no reason to keep this man in jail for so long.”

Withing 30 minutes of McAfee’s suicide in a Brians 2 prison cell near Barcelona being reported, the 75-year-old’s Instagram account made a cryptic post displaying a picture of the letter Q, which would appear to have been a reference to the well-traveled QAnon conspiracy theory – a conspiracy theory that claims there is a secret “deep state” world order of satanic pedophiles and human traffickers that are in war with a group led by former President Donald Trump.

Several media outlets that reached out to McAfee’s wife, Janice, his lawyer, and Instagram have yet to receive an explanation for both the cryptic post and for why McAfee’s account was shuttered.

I have significant disagreement with McAfee, but this was clearly an unlawful assasination by the government, not a suicide#McAfeeDidntKillHimself https://t.co/tPjF0ir0wq

#McAfeeDidntKillHimself JOHN MCAFEE WAS KILLED ON FOREIGN SOIL BY US INSURGENTS