John Mulaney Pays Tribute To Late Robin Williams, Destroys People Who Think He Was Funny Because Of His Depression 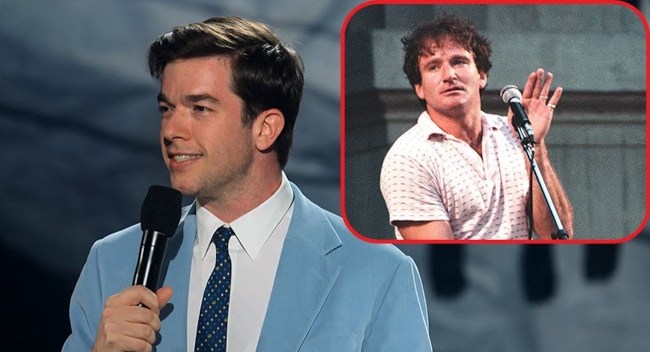 During the recent Netflix Is A Joke festival, the streamer held an event where some of the industry’s biggest comedians — including Mulaney, Dave Chappelle, Jon Stewart, and more — paid tribute to comedy legends such as George Carlin, Richard Pryor, Joan Rivers, and Robin Williams.

Mulaney, who’s back on the comedy trail after recently having a baby with Olivia Munn, focused his set on the late Robin Williams, who passed away at the age of 63-years-old.

“There’s an idea that I heard a lot where people like to theorize that comedy all comes from a place of pain and sadness. And people like to talk about comedians as if we do what we do because of some inner darkness. And this is especially thrown around when discussing Robin Williams. And with all due respect, f–k off with that s–t,” Mulaney said.

“Have a little respect for a brilliant artist who was just more talented than you. That’s what was happening. Making people laugh is incredibly fun. The artform of comedy is a joy to perform, and being a comedian is not a psychiatric condition. Are many of us also very fucked up, myself included? Yes. But, whatever — there are depressed people who don’t even have the decency to be great comedians. Why don’t you pick on them for a change?”

While I certainly agree with Mulaney’s point — Robin Williams, along with Mac Miller and Anthony Bourdain, is one of the only celebrity deaths to ever truly affect me — the reason that perception of comedians exists, whether it be Robin Williams or otherwise, is because comedians themselves are the ones who originated and perpetuate it.

If you’re as big of a fan of Williams as I am, I recommend checking out Dave Itzkoff’s biography Robin (probably the fastest I’ve read a book in about 20 years) and the HBO documentary Robin Williams: Come Inside My Mind.