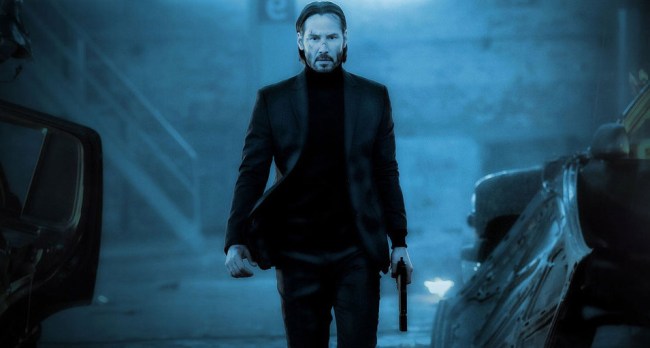 Big week for fans of Keanu Reeves movies. First, we get word that Bill and Ted 3 is officially going to happen, and now we get our first look behind-the-scenes of John Wick: Chapter 3.

The new images come courtesy of Dan Laustsen, the Academy Award-winning cinematographer for The Shape of Water and show both the working title as well as one of the locations John Wick 3 is currently filming in New York.

The first photo, which Laustsen says is from the first day of shooting, shows the the clapperboard with the film’s current working title John Wick 3: Parabellum.

“Parabellum” is an interesting choice for a couple of reasons, neither of which most of the general public will have any knowledge about.

One, “Parabellum” is Latin for “prepare for war,” from the phrase, “Si vis pacem, para bellum” meaning “If you want peace, prepare for war.” Which, if you’ve seen the first two John Wick films, makes 100 percent sense.

And two, Parabellum is also the name of a semi-automatic pistol better known in the United States as a Luger.

The second photo shows John Wick on, according to the address above one of the businesses, Pell Street in New York, i.e. Chinatown.

In addition to Reeves, John Wick: Chapter 3 also sees the return of director Chad Stahelski and screenwriter Derek Kolstad. Back in the cast are Common, Laurence Fishburne and Ruby Rose, with Hiroyuki Sanada (47 Ronin, The Wolverine) playing the new bad guy. No word yet on whether Ian McShane is returning (though it is expected), or whether rumors of the addition of Tilda Swinton and/or Halle Berry joining the cast for round three are true.