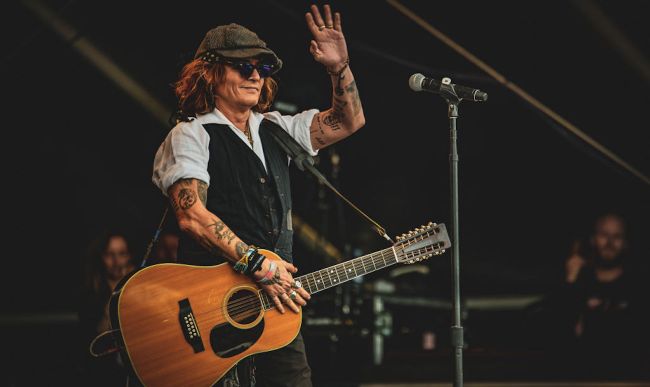 The first look at Johnny Depp as the infamous King Louis XV in his new film Jeanne du Barry, his first feature film in three years, has been released.

Jeanne du Barry, which is set to be directed by French actress Maiwenn, has been picked up by Netflix to be streamed in France. At this time, it’s unclear if or how the film will be officially released in the United States.

The ambitious drama is freely inspired by the life of Jeanne du Barry, Louis XV’s last royal mistress at the Court of Versaille, after Madame de Pompadour. Born into poverty, she is a young working-class woman hungry for culture and pleasure who uses her intelligence and allure to climb the rungs of the social ladder one by one.

She becomes Louis XV’s favorite companion. Unaware of her status as a courtesan, he regains his appetite for life thanks to their relationship. They fall madly in love. Against all propriety and etiquette, Jeanne moves to Versailles, where her arrival scandalizes the court. [via Deadline]

The film began production on July 26 and is currently scheduled to be an 11-week-long shoot in Versailles and other chateaux in the Paris area.

In addition to his film career, Depp has also resumed his music career, as he’s spent the summer on tour with his frequent musical collaborator Jeff Beck, with whom he always released an album. Next summer, Depp will go on a brief European tour with the band Hollywood Vampires, which also features Alice Cooper.

While Jeanne du Barry is obviously a step in the right direction for Depp’s career, the true sign that the comeback is full steam ahead is if and when he lands a major mainstream Hollywood role.