Johnny Depp’s Next Official Gig Will Be Working With Rihanna 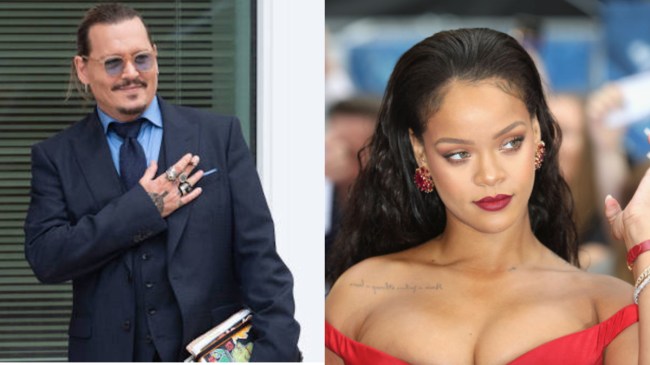 According to reports, Johnny Depp is set to appear at Rihanna’s upcoming Savage x Fenty fashion show on November 9.

While reports indicate that the 59-year-old — who will be wearing items from the Savage x Fenty men’s collection — won’t actually walk the runway, TMZ sources say that “he’s going to be a focus of one of the show’s ‘star’ moments, which has included the likes of Cindy Crawford and Erykah Badu in the past.” Depp will be the first male to be incorporated into one of the show’s “star” moments.

“Our sources say Rihanna and her team invited Johnny to be a part of it, and both sides were super excited to make it happen. We’re told Johnny has already filmed his part, and it’ll be included in the show’s premiere on Amazon Prime Video November 9. As for how Depp will look, we’re told the vibe is ‘cool and chic’ and works for all aspects of Johnny’s artistry — music, modeling and acting.” [via TMZ]

This won’t be the first time Depp makes an appearance at a celebrity-driven event, as he “appeared” at the MTA VMAs in late August as a floating augmented reality creation.

As for Depp’s film career, his next role will be as the infamous King Louis XV in the French film La Favorite. Depp also signed on to direct a movie about early 1900s Italian artist Amedeo Modigliani and is set to go on tour with his band The Hollywood Vampires next summer.

RELATED: Johnny Depp Is Now Dating The Married Lawyer Who Represented Him In The Amber Heard Trial (Photos)