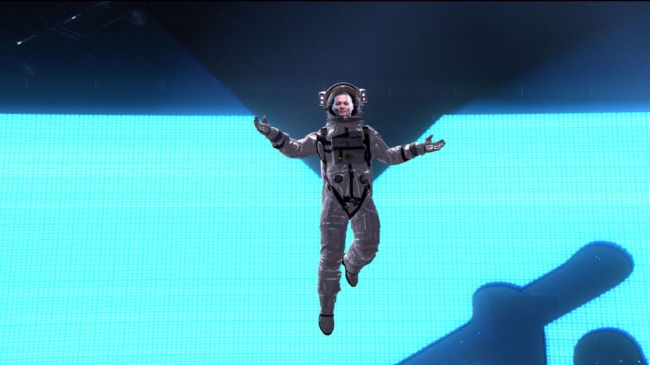 Ever since Johnny Depp won his defamation trial against his ex-wife Amber Heard earlier this summer, the former A-list actor has been slowly but surely launching his long-awaited career comeback.

While the 59-year-old has spent most of the summer across the pond on tour with his buddy Jeff Beck and beginning production on his new French film Jeanne du Barry, the Pirates of the Caribbean star made finally a notable appearance stateside on Sunday night, albeit in an extremely weird manner.

Johnny Depp appeared at the MTV VMAs as a digital, floating Moonman in a very bizarre segment

During Sunday night’s MTV Video Music Awards at the Prudential Center in Newark, New Jersey, Depp made his first major post-trial appearance in the United States, albeit as a borderline horrifying augmented reality creation (I think?).

“Hey, you know what? I needed the work. I just want you guys to know that I’m available for birthdays, bar mitzvahs, bat mitzvahs, weddings, wakes, any old thing you need,” Depp, digitally superimposed onto a floating MTV Moonman, said to the crowd.

Johnny Depp appears as the moon person at the #VMAs. https://t.co/K3f4GrgiuJ pic.twitter.com/S0dkWrR6mr

In addition to Jeanne du Barry, Depp is also set to direct a biopic about Italian artist Amedeo Modigliani and go on tour with the Hollywood Vampires (his band with Alice Cooper) next Summer.

Fans of the actor are likely awaiting to see if and when Depp will attach his name to a major Hollywood project, which would represent his first since 2018’s Fantastic Beasts: The Crimes of Grindelwald. Mads Mikkelsen, who took over the role from Depp after Warner Bros. effectively fired him, recently said that he believes it’s possible that the actor could reclaim the part of Grindelwald now that he appears to have rehabilitated his career.