Get Your Defibrillator And Insulin Ready Because Jolt Cola Is Coming Back Baby! 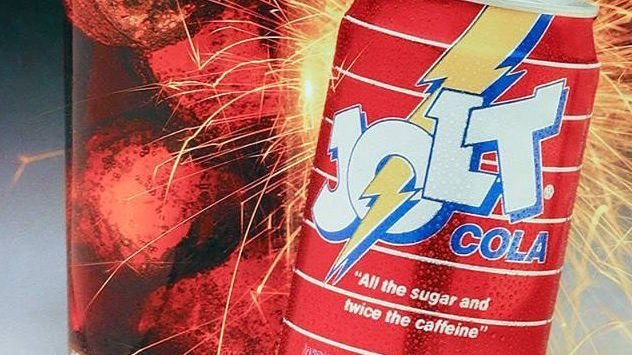 Welcome to 2017, where original ideas are apparently for suckers and reproducing old ideas from decades ago is the modus operandi. Let’s see what movies from yesteryear were remade, rebooted, and regurgitated in 2017: “Jumanji,” “Death Wish,” “Flatliners,” “The Mummy,” “Power Rangers,” and “Beauty and the Beast,” just to name a few. But it just isn’t Hollywood that is looking back to the past to reincarnate bygone notions. Even beverage companies are warping back in time and bringing back previously dead products. The 90s lip-puckering malt beverage of choice, Zima, was already brought back from the dead this past summer and Crystal Pepsi was rejuvenated two years ago. And now Jolt Cola, one of the darlings of the golden era of soda back in the 80s, is making a comeback.

Red Bull, Monster, various other energy drinks, and Adderall saturated the market in the early 90s and stole Jolt Cola’s caffeine-shaking limelight. But Jolt Cola is coming back baby! The once favorite drink of choice for students and gamers alike returns in its original can and will have all the sugar and twice the diabetes, err I mean caffeine. You know, because there hasn’t been study after study proving that excessive sugar intake is one of the worst things you can do to your body. Not to mention the rather odd timing to get back into the cola game when soda sales have declined for 12 years straight and soda consumption is at its lowest level in 30 years.

If the recipe and nutritional values stay the same as the original version that debuted in the 1980s, 12 ounces of Jolt will contain 71 milligrams of caffeine (twice the amount in other regular colas but about one-third the amount in a cup of coffee), about 10 teaspoons of sugar and 167 calories. But for those health-conscious Jolt Cola drinkers (Sounds oxymoronic), the company will begin marketing a diet version in the fall, called Jolt 25, which will be sweetened with sugar and NutraSweet and have 25 calories per 12-ounce can.

Jolt Cola will be available at Dollar General stores starting on September 21 where you can get a week’s worth of caffeine in a nifty 16 ounce can for a mere $1 each.

*Defibrillator and Insulin Not Included