UPDATED: Jon Stewart Says The Goblins In ‘Harry Potter’ Are Born Out Of Anti-Semitic Tropes 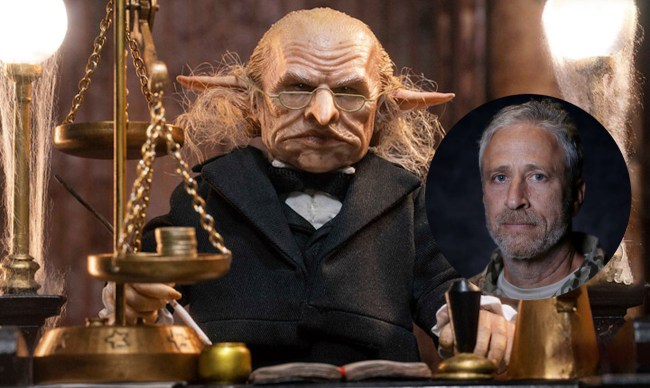 Jon Stewart has released a statement clarifying his comments, saying that he DOES NOT think J.K. Rowling is anti-Semitic.

“I cannot stress this enough. I am not accusing J.K. Rowling of being antisemitic. She need not answer to any of it. I don’t want the Harry Potter movies censored in any way. It was a lighthearted conversation. Get a fucking grip.”

While the Harry Potter 20th Anniversary: Return to Hogwarts that hit HBO Max on New Year’s Day featured virtually all of the major figures from the iconic franchise — actors, directors, etc. — one person that was noticeably absent was the creator of it all, author J.K. Rowling.

Rowling — who has become a controversial figure in recent years due to some of her opinions about sections of the LGBTQ community — is referenced a handful of times and appears in archival footage, but does not make a “new” on-camera appearance.

Despite not appearing in the widely-watched special, Rowling has still found herself making headlines, as famed comedian Jon Stewart recently accused the author of engaging in anti-Semitic tropes, particularly when it comes to the Gringotts Goblins, during a recent episode of his The Problem with Jon Stewart podcast.

“Here’s how you know Jews are still where they are,” Stewart said. “Talking to people, here’s what I say: Have you ever seen a Harry Potter movie? Have you ever seen the scenes in Gringotts Bank? Do you know what those folks who run the bank are? Jews!”

Stewart then pointed out how the goblins in the franchise are similar to an illustration in the 1903 anti-Semitic book The Protocols of the Elders of Zion.

“And they’re like, ‘Oh, [that illustration is] from Harry Potter!’ And you’re like, ‘No, that’s a caricature of a Jew from an anti-Semitic piece of literature.’ J.K. Rowling was like, ‘Can we get these guys to run our bank?’ It’s a wizarding world … we can ride dragons, you can have a pet owl … but who should run the bank? Jews, … but what if the teeth were sharper?”

“It was one of those things where I saw it on the screen and I was expecting the crowd to be like, ‘Holy shit, [Rowling] did not, in a wizarding world, just throw Jews in there to run the fucking underground bank. And everybody was just like, ‘Wizards.’ It was so weird.”

Harry Potter 20th Anniversary: Return to Hogwarts is now streaming on HBO Max. The next film in the Wizarding World franchise — Fantastic Beasts: The Secrets of Dumbledore — will hit theaters on April 15, 2022. Rowling produced and co-wrote the film, although her name is also absent from the first trailer that was dropped a few weeks ago.

RELATED: Emma Watson Visibly Stole Rupert Grint’s Soul, Described ‘Harry Potter’ Kiss As The ‘Most Horrifying Thing’ She Ever Had To Go Through