Emma Watson Visibly Stole Rupert Grint’s Soul, Described ‘Harry Potter’ Kiss As The ‘Most Horrifying Thing’ She Ever Had To Go Through 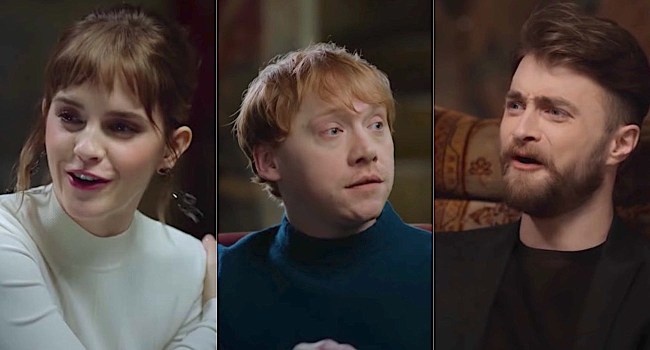 As the kids say, former Harry Potter actor Rupert Grint is down bad. And as Gen Xers and millennials say, he was Ethered.

During the Harry Potter 20th Anniversary: Return to Hogwarts special that hit HBO Max on New Year’s Day, there’s a moment where the three lead actors in the franchise — Daniel Radcliffe (Harry), Emma Watson (Hermione), and Rupert Grint (Ron) — reminisced about Ron Weasley and Hermione Granger’s climactic kiss in Harry Potter and the Deathly Hallows Pt. 2, and for some unknown reason, Watson chose unmitigated violence, describing the moment as, and I quote, “the most horrifying thing either of us ever had to go through.”

Grint, the poor lad, simply responded by saying “Yeah.” Ouch. His face basically epitomizes the infamous lyric “Hello darkness, my old friend.” To make matters worse, you’ve got to imagine that Grint — similar to the rest of us — had a massive crush on Watson, which was likely only amplified by working with her and pretending to be romantically involved for multiple years.

And, look, while Emma Watson may be the childhood (and adult) crush of an entire generation — I almost remember seeing Hermione Granger for the first time as a seven-year-old and not having a clue what was happening in my brain — that still does not give her the right to commit emotional terrorism in front of millions upon millions of people. Just ruthless.

Hermione didn't have to do Ron like that 💀 pic.twitter.com/nbsnvwPUlJ

Harry Potter fans, obviously, were quick to pick up on the moment:

Emma Watson telling the world about how horrible the kiss with Rupert Grint was and Daniel Radcliffe screaming ‘Oh’ was the funniest thing I’ve ever seen. Bless little Rupert

It’s been a few days since the Harry Potter reunion premiere, so I think it’s safe to finally say that Emma Watson did Rupert Grint dirty in their interview about them having to kiss.

#DanielRadcliffe face when #EmmaWatson says her kiss with #RupertGrint was the worst thing really mimes our own reaction… ‘Wow really? That hurts’ #ReturnToHogwarts

why does emma watson constantly go out of her way to tell rupert grint how HORRIFIC and REVOLTING it was to kiss him like i’m cringing poor guy pic.twitter.com/kRuPEPzKSh

#EmmaWatson didn't have to destroy #RupertGrint when saying their kiss was the most horrifying thing. His face just drops. #ReturnToHogwarts #HarryPotter20thAnniversary

Best actor goes to Rupert Grint for smiling while Emma Watson described how awful it was to kiss him. pic.twitter.com/RR9owM24b9

my man wants to end it all https://t.co/sjTZntJugl

You can see the glands preparing the tears 😂😂😂 https://t.co/PvzSYcmwVx pic.twitter.com/Vao3IuS4Gp

my man wants to end it all https://t.co/sjTZntJugl

RELATED: The ‘Harry Potter’ Reunion Shared A Photo Of Young Emma Watson That Was Actually A Different Actress Entirely