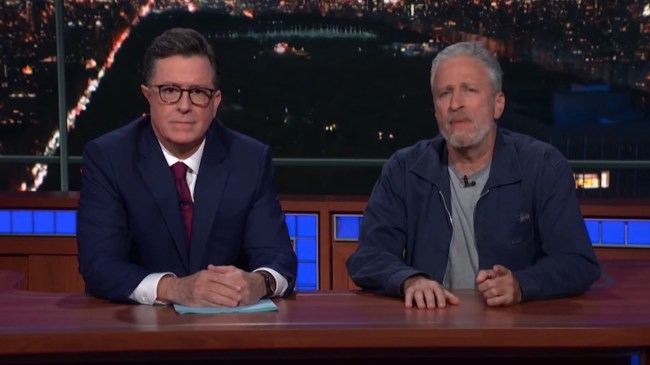 It’d be much easier if the 9/11 first responders he’s fighting so diligently for were able to receive the healthcare and treatment they deserve without a nationally known comedian going to bat for them.

Nevertheless, though, this is the world we live in and Stewart has been forced to dedicate his time and effort to stand up for those who stood up for us when we needed it most.

And while the whole situation is generally a bummer, the lone positive is that it has resulted in Stewart — who famously hosted Comedy Centrals The Daily Show for 16 years from 1999 to 2015 — being back in the public spotlight again.

Stewart, who still delivers a concise and scathing monologue unlike anyone else on television, hopped on with his buddy Stephen Colbert at The Late Show to, once again, absolutely posterized the living melted snail that is Mitch McConnell.

McConnell, the Senate Majority Leader, went on Fox & Friends to assert that Stewart was “bent out of shape” in his asking of Congress to extend the 9/11 Victim Compensation Fund.

And as if McConnell’s “bent out of shape” comments weren’t asinine enough, he then goes on to claim that Stewart was “looking for some way to take offense.” YIKES.

From there, the rest of the video is essentially four-straight minutes of Stewart arguing circles around McConnell before closing with a typically Stewart-esque heartfelt sentiment.

“So, if you want to know why the 9/11 community is bent out of shape over these past — let’s call it 18 years — meet with them tomorrow, as soon as possible, and don’t make them beg for it. You could pass this thing as a standalone bill tomorrow. Meet with them, I beg you.”