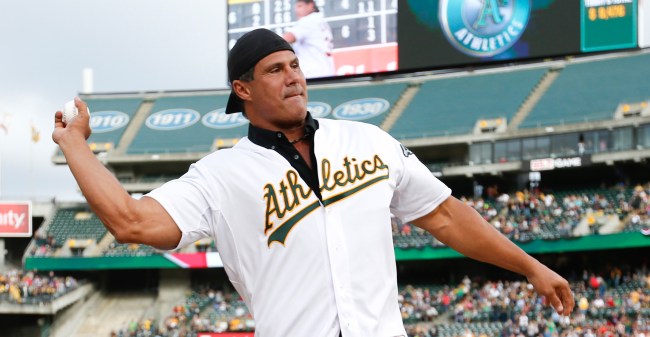 So… have you been following all of the drama created by former MLB slugger Jose Canseco this week? I hope so, because it’s been a doozy.

First, on Sunday – shortly after Alex Rodriguez announced his engagement to Jennifer Lopez, Canseco went on an unhinged Twitter rant about how A-Rod was cheating on Lopez with his ex-wife Jessica.

“Stop being a piece of sh*t,” Canseco tweeted at Rodriguez, before challenging him to a MMA fight. (Probably not your best idea, Jose.)

Then today we heard from both Jose’s daughter Josie and his ex-wife Jessica Canseco. Josie wanted no part of the family drama, but Jessica was very clear in how she felt about it, saying, among other things, “I certainly did not sleep with him.”

Then she made fun of Jose chasing aliens, as one should.

NOW, Jose is back on Twitter, doubling down on his claims and asking Jessica and A-Rod to take polygraph tests to prove that they are lying. (He’s already volunteered to take one himself. What a guy.)

“Jessica you’re calling me a liar you just forced me to defend myself and tell the truth here comes the biggest story ever about Alex Rodriguez and yourself the truth hurts do not turn away or hide from a polygraph,” he wrote, followed up by requests for both Rodriguez and Lopez to contact him.

Twitter reactions have been pretty much what you would expect from yet another Jose Canseco diatribe.

Jose just heads up, this isn't your texting app

Please, Twitter, whatever you do, do NOT make any changes to your app that limits our ability to follow Jose Canseco, thanks.