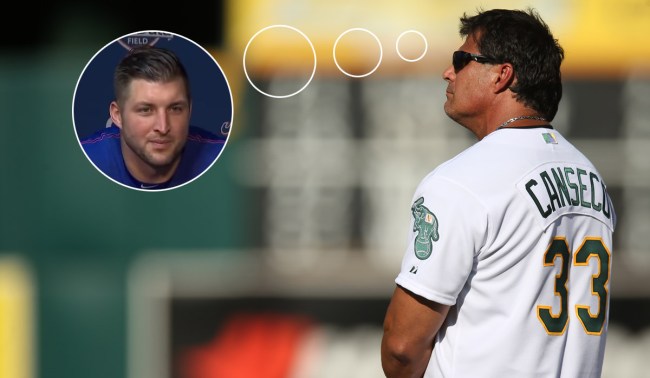 54-year-old Jose Canseco is a national treasure. He may not belong in the Baseball Hall of Fame, but he certainly deserves to be in some kind of Hall of Fame.

Very few men have ever been able to reinsert himself into the public consciousness with more ease than the one-time juiced-up slugger. All he needs is internet access and his login for Twitter and, voila!

Just a few weeks ago, Canseco popped back on our radar when he tweeted about a new gig he has where anyone can go Bigfoot and alien hunting with him.

For another example, on Monday, Canseco tweeted an offer to help aspiring New York Mets outfielder Tim Tebow out with his hitting, tweeting, “Tim Tebow let me help you with your swing I just saw one of your bats you have no rhythm right now and you’re to rotational I will help you for free I’m a fan of yours.”

Punctuation, grammar and spelling errors aside, this tweet has left me completely intrigued. In fact, if I were a television producer I would be on the horn trying to make this into a TV show right now.

That’s Canseco heading to the ring for his fight in the Super Hulk Tournament during Dream.9 on May 26, 2009 in Yokohama, Japan – a fight he lost at one minute, 17 seconds in the first round.

Amazing, right? Almost as amazing as this…

That is Canseco boxing former NFL running back Via Sikahema during their celebrity boxing match in 2008 – a fight that Sikahema (seven inches shorter and 43 pounds lighter than Jose) won via knockout in one minute, 37 seconds.

So, with all of that in mind, naturally, the Twitter reactions to Canseco offering to help out Tebow were A+.

And thus spake Tebow: “Tempt me not, for although you were once beautiful in LaRussa’s eyes, thou hast fallen.”

I want to learn about Big Foot, Time Travel, Aliens and how to swing properly.

Tim, Jose will also mentor you on gold glove outfield play while the discussions surrounding alien technology are an added bonus.

Perhaps you could barter. He could repay you with a years supply of punctuation marks.

Lmao can’t wait till Tebow gets popped for steroids

Off the top of my head, this seems like a good idea