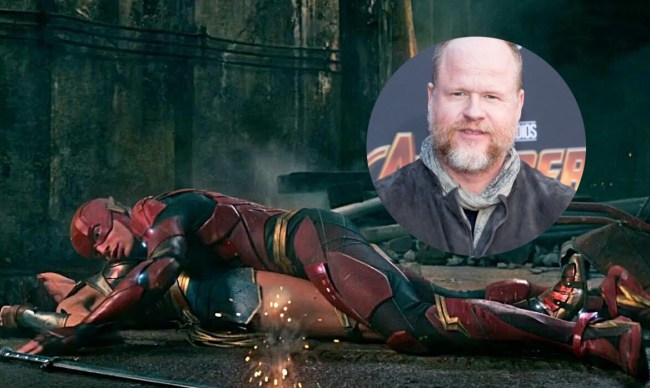 Much-maligned Justice League director Joss Whedon — who has been the subject of abuse and misconduct allegations in recent years — has given his first interview since 2017’s disastrous Justice League hit theaters.

The interview, published in New York Magazine, sees Whedon shift the blame to others, stating that he has never worked with a “ruder group of people.”

Whedon also made specific comments about Wonder Woman actress Gal Gadot — who claims Whedon threatened to ruin her career — saying that “English is not her first language” and that’s why she perceived his comments as threats.

“He threatened my career and told me that if I did something, he’ll make sure my career will be miserable and I just took care of it on the spot,” Gadot said back in May.

“English is not her first language, and I tend to be annoyingly flowery in my speech,” Whedon told New York Magazine in this January 2022 interview.

Reached for comment, Gadot responded to Whedon in an email to New York Magazine, simply saying: “I understood perfectly.”

In addition to Gadot, Whedon also took shots at Fisher — who categorized Whedon’s on-set behavior as “gross, abusive, unprofessional, and completely unacceptable” — by asserting that he cut down Cyborg’s role in the film for two specific reasons: “the storyline ‘logically made no sense,’ and he felt the acting was bad.”

Whedon’s revelations about making Justice League almost a year after Warner Bros. decided to finance and release the famed “Snyder Cut” cut of the film on HBO Max back in March of 2021. That version of the film, which clocked in at over four hours long, has much better received by both critics and audiences alike. Whedon’s 2017 version currently holds a 40% critics score on Rotten Tomatoes (which is FAR too high), while Zack Snyder’s Justice League sits at a 71%. In terms of audience scores, Snyder’s take also bests Whedon’s by a score of 94% to 69%.

With Whedon already on the outskirts of Hollywood and largely considered persona non grata, these latest disparaging comments about the Justice League cast certainly won’t help his case.