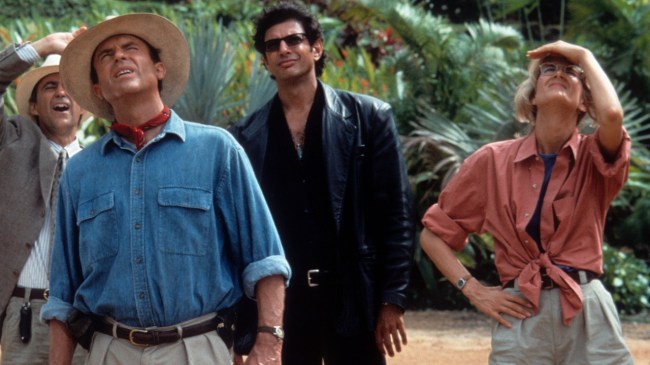 As Dr. Ian Malcolm says in Jurassic Park, “life cannot be contained”, and apparently, neither can nostalgia.

Speaking at Collider-hosted screening of Jurassic World at the ArcLight Cinemas in Hollywood on Tuesday, Safety Not Guaranteed and Jurassic World director Colin Trevorrow revealed that three of the biggest stars from the original Jurassic Park — Laura Dern, Sam Neill, and Jeff Goldblum — will be returning for the next entry in the franchise alongside Chris Pratt and Bryce Dallas Howard.

While Goldblum briefly appeared in Jurassic World: Fallen Kingdom and Dern cameoed in Jurassic Park III, Trevorrow said that the trio will have significant roles in the upcoming sequel. Dern will be back as Dr. Ellie Satler, Neill will reprising his role of Dr. Alan Grant, while Goldblum is set to return as Dr. Ian Malcolm.

.@ColinTrevorrow is also brining back the original cast of 'Jurassic Park,' Sam Neill and @JeffGoldblum to reprise their roles in #JurassicWorld3! pic.twitter.com/nlVwKef10i

The announcement of Dern, Goldblum, and Neil’s return also came just a week after Trevorrow released the short film Battle at Big Rock, which is set one year after the events of Jurassic World: Fallen Kingdom.

When we last left the Jurassic World franchise, dinosaurs — that humans foolishly tried to auction — had escaped and made their way into the open world. While the first two Jurassic World films have been ultimately dull in my opinion, the idea of dinosaurs wreaking havoc in the open-world certainly makes for an interesting premise.

At this time, the still-untitled third film in the Jurassic World franchise (and sixth Jurassic film overall) is set to be released in theaters in the United States in 2021.