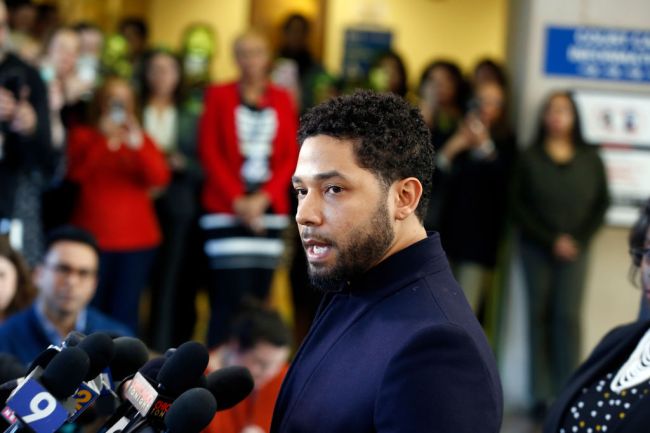 Jussie Smollett, the Empire actor who claimed that he was attacked by two men who yelled “MAGA country” at him in 2019, has been found guilty of five charges in relation to the incident. He was found to be innocent for a sixth charge, aggravated battery/wearing a hood or mask to conceal his identity.

Smollett, 39-years-old, has been found guilty of five felony charges, including lying to the police about the alleged hate crime. Smollett’s trial was delayed for over an entire year due to the pandemic.

Back in 2019, Smollet reported to Chicago police that he was assaulted by two men in ski masks on January 29, 2019, claiming that they used racial and homophobic slurs and said, “This is MAGA country.” Smollet also alleged that the men put a noose around his neck.

Up until this week, it was widely assumed Smollett wouldn’t serve any actual time if found guilty for the six disorderly conduct claims. However, despite having no prior criminal record, the strong insistence of Smollett’s two days of testimony in his own defense greatly reduced that possibility in the light of today’s conviction. [via Deadline]

The jury began deliberating their verdict on December 8 and came to their decision on the afternoon of Thursday, December 9. As a result of the five guilty charges, Smollet faces up to three years in prison and a $25,000 fine. Sentencing will happen during the next few weeks, and in the meantime, Smollett will stay free on bond.

Following the news of Smollett’s guilty charges, the usual talking heads predictably hopped on the opportunity to react to the verdict on Twitter.

Including Biden and Kamala

Jussie Smollett guilty on 5 felony counts. He perpetrated a hate crime hoax & made the road that much tougher for real victims.
As for the press & politicos who gleefully bought his obvious nonsense & used it as an excuse to bash America, shame on you too.

Jury finds Jussie Smollett guilty of five felonies for staging a fake hate crime in Chicago. Look forward to @VP’s apology for this Tweet calling what happened to Jussie a lynching. And for @JoeBiden’s apology for calling this an example of homophobia and racism. pic.twitter.com/JZgx7wMmjV

Today a jury found him GUILTY of lying about the whole thing.

What action will Twitter take to sanction those responsible for perpetuating the #JussieSmollett hoax, which includes everyone from POTUS, VP, and every corporate media outlet.

Cruel: Jussie Smollett Will Be Forced To Share A Jail Cell With His Attacker https://t.co/FSgTn67Slr

In addition to the Fox drama Empire, Smollett was also known for appearances in films such as The Mighty Ducks, North, Alien: Covenant, and Marshall, and television shows such as The Mindy Project, Revenge, Underground, and Star. Smollett hasn’t acted in any projects since making the false claims.