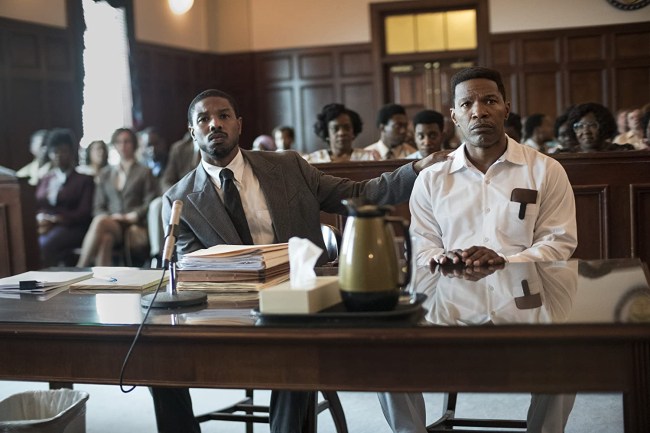 Warner Bros. has made the 2020 legal drama Just Mercy available to rent for free in an effort to help educate people on the plague of systemic racism that rots this country from the inside out.

Directed by Destin Daniel Cretton, the film — which was released on Christmas Day of 2019 — stars Michael B. Jordan as Equal Justice Initiative founder Bryan Stevenson, a young Harvard law graduate who travels to Alabama to help Walter McMillian (Jamie Foxx), an African-American man who was wrongly convicted of the 1986 murder of Ronda Morrison.

“We believe in the power of story,” a statement from Warner Bros. reads. “Our film ‘Just Mercy,’ based on the life work of civil rights attorney Bryan Stevenson, is one resource we can humbly offer to those who are interested in learning more about the systemic racism that plagues our society. For the month of June, ‘Just Mercy’ will be available to rent for free across digital platforms in the US.”

“To actively be part of the change our country is so desperately seeking, we encourage you to learn more about our past and the countless injustices that have led us to where we are today. Thank you to the artists, storytellers, and advocates who helped make this film happen. Watch with your family, friends and allies. For further information on Bryan Stevenson and his work at the Equal Justice Initiative please visit EJI.org.”

We believe in the power of story. #JustMercy is one resource we can offer to those who are interested in learning more about the systemic racism that plagues our society. For the month of June, #JustMercy will be available to rent for free on digital platforms in the US. @eji_org pic.twitter.com/3B2IHMNk7E

You can now watch Just Mercy — which stars Jordan, Foxx, and Academy Award winner Brie Larson — on Amazon and iTunes.