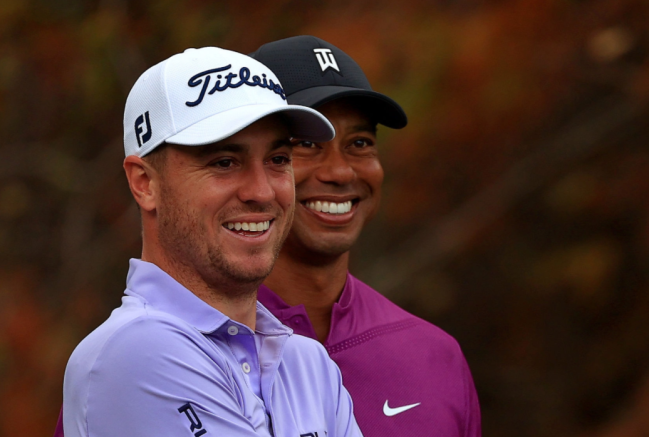 The news of Tiger Woods’ car accident broke just moments before Justin Thomas was getting set to speak with PGA Tour media members ahead of this week’s WGC Workday Championship at Concession. Thomas, a very good friend of Woods, was asked about the accident and understandably got emotional and said that he’s worried for his two kids, son Charlie and daughter Sam.

Justin Thomas holds back tears when asked about Tiger Woods’ crash. “I worry for his kids, I’m sure they’re struggling.”🙏 pic.twitter.com/wOifOABLR1

Thomas and his father played alongside Tiger and Charlie in the PNC Championship back in December and their lighthearted, trash-talking filled relationship was on full display.

Woods was injured in a single-car crash in Ranchos Palos Verdes, California on Tuesday just after 7:00 AM. According to the LA County Sheriff’s office, Woods’ car rolled over and sustained major damage. He was extricated from the car with the jaws of life’ by Los Angeles County firefighters and paramedics.

Golf Digest’s Daniel Rapaport received a statement from Woods’ agent Mark Steinberg shortly after the news broke: “Tiger Woods was in a single-car accident this morning in California where he suffered multiple leg injuries. He is currently in surgery and we thank you for your privacy and support.” He was taken to Harbor-UCLA Medical Center.