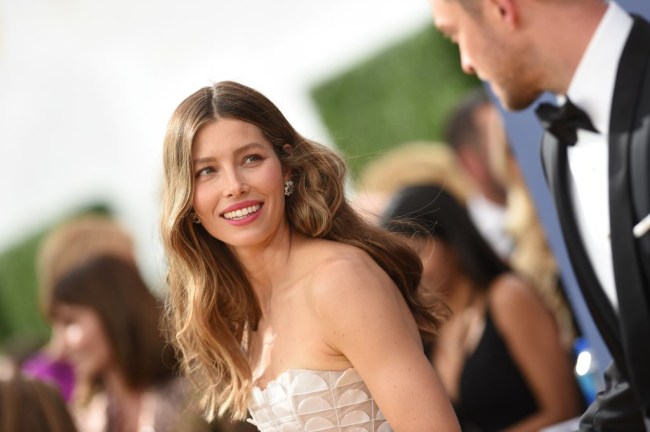 Justin Timberlake was caught in photos and video holding hands with his co-star from an upcoming movie. The couple are seen getting very cozy at a New Orleans bar, prompting rumors of Timberlake possibly cheating on his current wife, Jessica Biel. However, sources claim that there is “100% nothing going on.”

The Sun released photos and a video of the 38-year-old Timberlake and 30-year-old actress Alisha Wainwright getting very close to one another.

Timberlake and Wainwright, who are currently working on the upcoming Palmer movie together in Louisiana, were seen at the world-famous Absinthe House on Bourbon Street. The two were sitting at an outdoor table on Thursday when witnesses said they saw some seemingly flirtatious behavior.

“[Timberlake and Wainwright] were smiling and laughing,” an eyewitness told The Sun. “At one stage, he grabbed her hand and rested it on his knee. She then gently started stroking his leg. Then he clutched her hand with both of his and was playing with her hands.”

Reports claim that the singer and actress were alone on a balcony for around 40 minutes before going inside the bar. They reportedly left the Absinthe House around 12:30 a.m. through the back door.

Rumors of Timberlake cheating on Jessica Biel were intensified when it was reported that Timberlake was not wearing his wedding ring at the time of the flirty encounter. The rep for Timberlake did not comment.

Now, sources allege that the married singer was not cheating, but rather preparing for the movie role. “There is 100 percent nothing going on,” a Timberlake source said.

A source informed Hollywood Life that the pair are “filming a movie where their characters have a relationship, which is probably what was [shot.] No validity to any other rumor other than that they are filming together.” Hence, that’s why Timberlake wasn’t wearing his wedding ring because it is “for the movie.”

Another source told E News! that the rendezvous was “innocent” and that “they’re filming a movie together and it was a group of people hanging out. There is nothing going on between them.” Hollywood actors have the best life and the best PR agents.

Wainwright has been acting since 2008, but only became a more popular actress in 2017 as Maia Roberts in Shadowhunters and as Nicole Warren in Raising Dion alongside Michael B. Jordan on Netflix.

Timberlake and Biel began dating in 2007 and got married in 2012. Should their marriage go south and they get a divorce, there is a lot of money owned between the two. Justin Timberlake has a net worth of $250 million, and Jessica Biel has a net worth of only $18 million.

Biel has not posted any photos with her husband in nearly a month when they were showing off their Halloween costumes. The same goes for Timberlake and his Instagram.

You can see the photos and video over at The Sun.