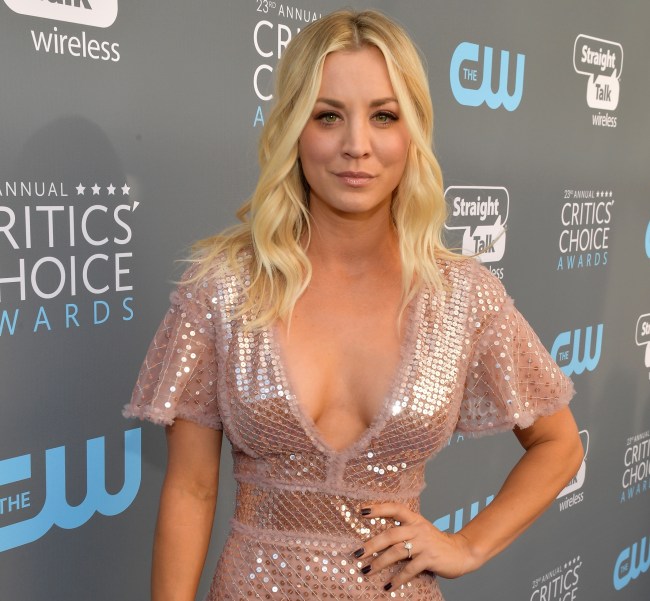 You’ve got to admire a woman for the ages like Kaley Cuoco, who is so dedicated to her craft that she did whatever she could to nail her steamy scene in the upcoming HBO series The Flight Attendant. Now, as someone who has no idea what it’s like to film a scene like that — but would imagine it’d be difficult faking it without real passion (or after nine shots of tequila) — I have nothing but sympathy for Kaley. Luckily, she had costar Michiel Huisman to help walk her through and give her tips on what it’s like to film such a hot and heavy scene.

Talking to USA Today, Kaley Cuoco described how awkward she first was when tasked to fake doing it with the cameras rolling, admitting that having a lovey scene on a network TV sitcom like The Big Bang Theory is a little different than doing something for a streaming network. Take a look at how the 34-year-old actress described the whole situation.

The star certainly had to turn the temperature up a notch while filming a sex scene in a plane toilet with Huisman, who plays her love interest Alex Sokolov.

However, Cuoco just couldn’t seem to get in the mood and needed a bit of a nudge on what to do considering it was her first time shooting something so intimate.

She told USA Today: “Network 8 o’clock TV is a little different than (streaming) all hours of the night.

As things progressed, Cuoco turned to Huisman for advice to help her make it look more believable as she was still struggling.

She added: “So when they called action, I still wasn’t really giving my all.

“Michiel finally goes, ‘It looks like you’re hovering over a public toilet. What are you doing?’

The steamy scene in The Flight Attendant between Kaley Cuoco and Michiel Huisman takes place in an airplane bathroom, so, yeah, it’s not necessarily the sexiest spot to try and sneak a romp in — nor the most comfortable. But, you know, things like this have to look as realistic as humanly possible, so good on Kaley to really give it her all and make sure she nailed the fake, uh, nailing.

The Flight Attendant is currently available to stream on Binge.