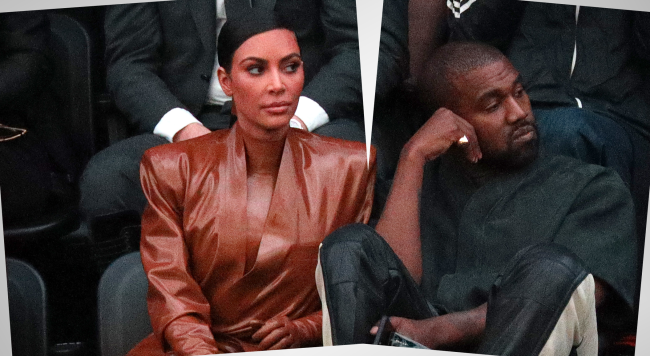 Let us know if any of this surprises you in the slightest. Kanye West reportedly is annoyed that people out there believe his estranged wife Kim Kardashian was the first to file and that she is divorcing him, not vice versa.

For the record, Kardashian filed divorce papers two months ago and it was Kanye who had to respond to them.

Now, however, Page Six reports that West is “super annoyed that the story is being constantly presented as her divorcing him” because of Kardashian’s “huge spin machine.”

“Actually it was him saying for a year that they have nothing in common except the kids and he wanted out,” insisted the insider. “She pulled all the stops to try to save the marriage.”

The source added that he let her “file first in order to give her dignity.”

A source previously told Page Six the couple, who has four children, has ceased talking.

“Even before Kim filed for divorce, Kanye changed his numbers and said, ‘You can contact me through my security,’” the source told us.

Related: Rapper Azealia Banks Shoots Her Shot At Kanye West, Says She’s Ready To Give Birth To His ‘Demon Entity’

The source also said, “Despite this, she trusts him around the kids. He loves them and is seeing a lot of them. She leaves the house and he arrives and hangs out with the kids. They have an army of nannies so the transition is easy.”

Kanye was reportedly the one who asked Kim to not be present when he visited the children.

West reportedly wants his the next person he is with to be “an artist and a creative person” so “they can speak the same language to each other.”

What language that might be is still yet to be determined.