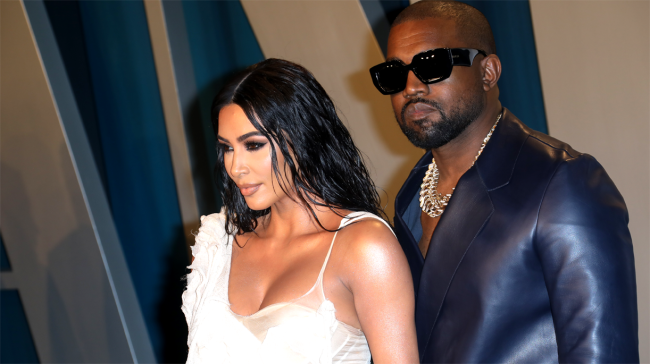 During an unhinged Thursday night tweet storm that saw him share an image of a swastika, seemingly announce his candidacy for President, and take shots at Twitter CEO Elon Musk, former rapper Kanye West claimed that he “caught” future Hall of Fame point guard Chris Paul with his ex-wife Kim Kardashian.

West and Kardashian were married for eight years, beginning in 2014 and ending with their highly-publicized divorce earlier this year. Paul, 37-years-old, has been in the NBA since 2005 and is considered to be one of the greatest players in the history of the league.

Let’s break one last window before we get outa here I caught this guy with Kim Good night pic.twitter.com/1rqdJ5szrj

West’s Thursday night string of tweets came following a shocking appearance on Alex Jones’ discredited and de-platformed program InfoWars that saw the 45-year-old father of four further defend and support Nazis, saying that he “sees good things about Hitler” and that he wants people to “stop dissing Nazis all the time.”

Needless to say, the reactions to Paul now finding himself embroiled in West’s drama were hilarious:

This explains Chris Paul’s bad luck. He got hit with the curse https://t.co/u8qi5MKxY1

Chris Paul when he sees why he’s trending pic.twitter.com/Ma5SxftkTB

Even former NBA center Andrew Bogut got in on the jokes.

Some people are wondering if West’s call out of Paul is one of the greatest tweets in the history of Twiter.

On the Mount Rushmore of NBA drama https://t.co/nJwUWPv3iD

Dude watch White Lotus you can get cheated on without becoming a literal fucking Nazi my god https://t.co/8XvmOR5xEI

Is this the wildest tweet in the history of this app https://t.co/Nno4QicqiM

Most people just couldn’t believe it, even if it did come from the increasingly unhinged Kanye West.

"I'll show them how cool I am, here's a picture of a dude who slept with my wife." https://t.co/zH3kHLrpZ8 pic.twitter.com/ApS2cN5crw

Maybe longtime Kendall Jenner fling Devin Booker is the one who hooked him up.

Despite the fact that Jones has been sued and ordered to pay over $1 billion in damages to the families of Sandy Hook victims due to the conspiracy he spread about the tragedy over the years, even he looked visibly uncomfortable listening to West say things like “I love Hitler.”

West’s continued antisemitism comes following a stretch of weeks that saw his previously billion-dollar net worth cut in half after he lost deals with the likes of Adidas, Balenciaga, and Creative Artists Agency.